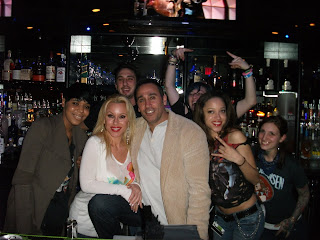 
Rock ‘n’ Roll-Inspired Greenwich Village Restaurant “Rockography”
is taking New York City by storm. Bringing a new culinary concept to the big apple with a distinctive dining experience and amped up comfort food with a rock ‘n’ roll twist.
Rockography is the brainchild of Kelley Jones, Joe Vicari and Joshua Kaiser of Trust3 Hospitality, the restaurant and nightclub magnates behind hotspots such as Kenmare, Juliette Supper Club, Todd English Pub and Griffin Nightclub. Born out of their passion for topnotch food and their love of rock ‘n’ roll, the trio joined forces with Venture Capitalist David Smith to launch their newest project. Executive Chef Ted Cipollone, formerly of The Prado at Balboa Park in San Diego and hand-selected by Trsut3 Hospitality, will feature classic all-American dishes with a tuned-up twist, such as gourmet corn dogs, super-sized burgers, white truffle macaroni and cheese, chicken and waffles and decadent milk shakes. They’ll roll out a Beatles Brunch on Sundays complete with a Bloody Mary Bar.
Staged in an atmosphere that promotes the importance the rock revolution has played in society, diners will be swept back in time to the classic rock era. Six interactive flat screens will stream vintage concert footage and iconic music videos and an interactive iTunes jukebox will blast rock staples from the past five decades. Other signature elements include electric guitars that line the walls, a bar fabricated out of real Marshall amplifier cases and a hostess podium made out of a concert speaker.
Photos by famed rock photojournalist Chris Walters, who’s shot icons such as The Beatles, The Rolling Stones, Jimi Hendrix and Led Zeppelin, will line the restaurant’s walls. In addition, multi-media street artist "D*Face" aka Dean Stockton, notorious for his underground graffiti worldwide will be tagging works of art. Soho-based artist, Primivito will also be showcasing his works. All wait staff will rock-out in vintage rock t-shirts commissioned by Chris Walters, which will also be available for purchase at the restaurant.
Rockography located at (504 Sixth Avenue at the corner of 13th Street) will serve lunch and dinner seven days a week until 2 a.m. on weekdays and 4 a.m. on weekends. A weekly “Brunch with the Beatles” will also take place on Sundays. For more info on “Rockography” please log onto; www.RockographyCafe.com
Posted by DAILY FILM FORUM at 12:00 AM