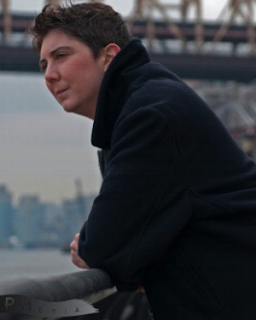 What happens when there are no sexual lines or boundaries? You get the laugh out loud new comedy "Curiosity Killed the Cat!" Currently being filmed in New York City, Curiosity Killed the Cat is about the last time Helen entered The Cup Coffeehouse, she broke up with her bi-sexual boyfriend whose gay side was suddenly overshadowing his straight side as he flirted with Jamie, the flamboyant male waiter, right in front of her. She is now entering the Cup enticed by her own sexual curiosity. She has been dating Pike, the infamous dyky waitress, and has come to visit her at work. Jamie can't help but warn Pike to not get too whipped by the "straight girl."
The last time Gayle entered The Cup, she was informed that her daughter Stephanie was a lesbian. She was introduced to Stephanie's girlfriend Mary Ann and her unconventional reaction to all of this abrupt new information was astonishing. Gayle was not upset by her daughter's sexual orientation but rather very disappointed that Mary Ann was too boring and not nearly alternative enough to make her daughter's choice trendy. Gayle is now introducing the rainbow flag-flying coffee shop to Harold, a wealthy gay real estate broker. Jamie is instantly and surprisingly attracted to this older sugar daddy. Pike is freaked out when Mary Ann,with whom she has had a meaningless one night stand with, enters The Cup while Helen is there. Drama ensues as anger, jealousy, unexpected attraction and too much female as well as male estrogen explodes. What follows is a comedy of love-triangle errors made up of the most unusual combinations.
Curiosity Killed the Cat is written by Elissa Goldstein and is directed by Jana Mattioli. Produced by Mattioli Productions in association with Dreamcatcher Entertainment and Robert and Joyce Borneman, Greg Jackson and Steve Wolf. Curiosity Killed the Cat stars Emmy Winner Blanche Baker, Elissa Goldstein, Samantha Artese, Keith Collins, Steve Wolf, Greg Jackson and Julia Weldon. Curiosity Killed the Cat, a comedy rollercoaster ride not to be missed!! Look for it out this Fall 2011.