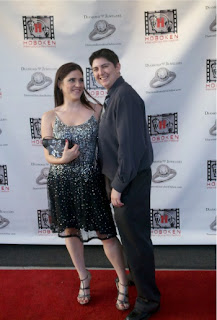 There’s a whole lot of buzz going around about “Curiosity Killed the Cat,” a new comedy film directed by Jana Mattioli and written by Elissa Goldstein. We got a chance to sit in behind the scenes on set for the upcoming film and we can tell it’s going to be outstanding. We caught up with both writer and director to ask about “Curiosity Killed the Cat” and they shared with us their excitement about working with an “incredible cast and crew” to bring together what we know is sure to be a hit.

Acclaimed Lesbian Director Jana Mattioli (An Affirmative Act, BIdentity Crisis) is about to get the masses laughing hard with her new comedy farce “Curiosity Killed the Cat”. Jana has shown her skill in directing drama with “An Affirmative Act,” a courtroom thriller about LGBT marriage, which hit the big screens this past April in theaters nationwide and is currently set for DVD release. This unstoppable filmmaker was recently named as one of The Advocate’s “Forty People Under 40 To Look Out For” in the May 2011 issue.

“Curiosity Killed the Cat” is a tale of what happens when you put together the right people at the right place at the right time with just a little curiosity thrown in for fun. Hilarity ensues! Elissa Goldstein (An Affirmative Act, The Great Fight) proves herself to be not only a talented actress but also a hilarious screenwriter with a comedic flare that is sure the fire up the masses.

The scene is a LGBT coffee house where “straight” Helen (Elissa Goldstein; An Affirmative Act, The Great Fight) meets up with her maybe- girlfriend Pike (Julia Weldon, The Coffee Klash, Before and After) and flirty waiter Jamie (Keith Collins; Stuck in the Middle, A Fight for Survival). Gayle (Blanche Baker; Emmy award winner, Sixteen Candles) and Harold are there too, enjoying a very-soon-to-be drama filled day. When Mary Ann (Samantha Artese; The Coffee Klash) shows up at the coffeehouse, she brings along with her a superb mix of drama and comedy. Steve Wolf (BIdentity Crisis, The Coffee Klash) plays the slimy straight guy Chase, to complete this fantastic cast.Curiosity Killed the Cat is produced by Mattioli Productions in association with Dreamcatcher Entertainment. Executive Producers: Robert and Joyce Borneman, Greg Jackson, and Steve Wolf.

Anything goes when these encounters become a hilarious who's who of attraction, break-ups, one-night-stands, and boundary-free sexuality. You don't know what to expect next! Be ready for it when the film is released in the fall of 2011. Are you curious? We know we are! We can’t wait to see “Curiosity Killed the Cat” and look forward to more amazing projects from Mattioli Productions and Dreamcatcher Entertainment. For more info log onto, www.CuriosityKilledCat.com