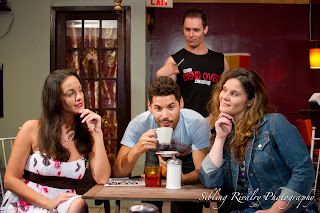 Chase, a recurring character in a series of coffee shop escapades sets the stage for the revelation of Suzie’s’ sexuality. We learn that Suzie isn’t the only one with something to reveal.

Suzie meets an old college friend Alexa at a coffee shop, which is the hot spot for the local gay community. Alexa comes from the Midwest where there is no “gay community”, at least none that she is aware of. Suzie has given up on men since college where she was roommates with Alexa, so she isn’t exactly sure of how to break the news that she now dates women to her longtime friend. Suzie is hoping the gay environment at “The Cup” and the fact that her gay brother Jamie works there will give her the confidence to tell Alexa.

The daily drama of the coffee shop brings some hysterical moments to the screen as waiters Jamie and Adrien interact. Adrien is eye candy for the ladies and for the men as it turns out, but there really aren’t any takers, or at least none that Adrien is interested in.

Suzie and Alexa engage in an unintended educational dialogue as Suzie hopes to reveal her sexuality. Alexa keeps Suzie from getting to the point because she steers the conversation from naivety about the gay community. In the epicenter for the gay community, clearly Alexa is an outsider. As Alexa becomes educated, we may learn more than we want to.