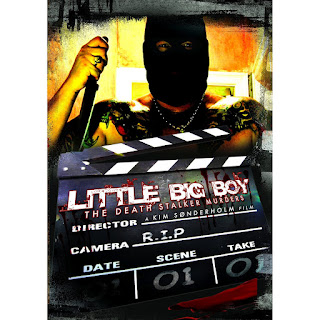 Little Big Boy, Kim Sønderholm’s tale of a film director working on his fourth film where things are not exactly going as planned, is after much anticipation finally being released August 21st 2012 to Amazon http://www.amazon.com/Little-Big-Boy-Stalker-Murders/dp/B0085X31AK/

Little Big Boy is, to say the least, a film like no other. It tells the story of acclaimed horror film director Jimmy Duncan, famous for his hot temper aswell as his very exploitative movies. Having witnessed the murder of his mother at the age of seven, Duncan grows up at an orphanage and as an adult works his way up in the movie industry.
Caught up in the downward spiral of his own success surrounded by movie reviewers who refuse to acknowledge his obvious talent, starlet wannabes with absolutely no talent, producers with little patience and people who will do anything and exploid anyone to become famous in an industry where you can count on noone, we follow Jimmy while working on his fourth feature film “Death Stalker”, which quickly turns into a descent into complete and utter madness as his leading lady leaves the production halfway through the shooting. This begins the insane fall of Jimmy Duncan.
All this while being haunting in his dreams by his childhood experiences.
Along the way we meet many familiar faces: Troma’s Lloyd Kaufman, April Monique Burril (Chainsaw Sally, Good Sisters), Monique Dupree (Satan Hates You, Spirit), Megan Sacco (Avantgarde), Amy Lynn Best (A Feast of Flesh, Splatter Movie), Rachel Grubb (Terror Overload, Strip Club Slasher), Brandon Slagle (Methodic, Mega Shark vs Crocosourus), David C. Hayes (Blood Moon Rising, Slices), Keith Collins (The Meat Puppet, Stuck in the Middle), Manoush (Amelie from Montmatre, Le Petite Morte), Gry Bay (All About Anna), Melany Denise (Westbrick Murders) and realitystars/celebritymodels Katrine Poulsen and Jessica Sky and many others. The role as Jimmy’s daughter is played by teenage talent Nicolette Michaela. Furthermore it contains brief cameos by Playboy models Angelina Leigh and Nikki Magnusson.
Jimmy Duncan at his adult age is played by the director Kim Sønderholm himself, while seven year old Jimmy is played by Danish child rapper/actor Toke Lars Bjarke who recently starred in Academy Award Winner/Golden Globe Winner for best foreign film 2011, In A Better World.
Posted by DAILY FILM FORUM at 9:44 AM