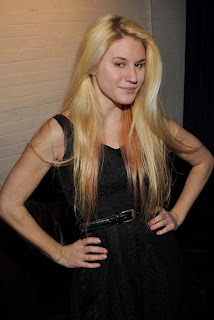 Thursday night was a wild one for Actress Theresa Galeani celebrating her birthday at Johnny Utah’s. Having a lot to celebrate, after a busy few months of filming acclaimed movies ‘A Fight for Survival’ and ‘Non Compos Mentis’ also rehearsing for her staring role in the upcoming play ‘Smoke Em’ if You Got ‘Em’,
The pint sized actress indulged in a night of bull ridin’, barbeque, and debauchery at New York’s famed Johnny Utah’s. Endless pitchers of margaritas flowed before Galeani took her chances riding the mechanical bucking bull. Sparklers wisked throughout the packed crowd as everyone joined in to wish her well. Others in attendance were CSI’s Gerald McCullouch, Actor Keith Collins, HBO’s Telling Nicholas Thanbir Ahmed & the cast of ‘Smoke Em’ if You Got ‘Em’. Ending the evening, deciding to honor her southern heritage, was later was seen diving into a plate of buffalo wings. A true way to end the night!!
Posted by DAILY FILM FORUM at 1:18 AM