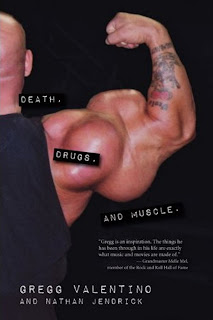 Gregg Valentino's life story as told in the book Death, Drugs & Muscle is nothing if not immensely compelling. His life is a tragic story of drugs, death, street gangs and self-destruction. Containing all of the components of a summer blockbuster--sex, drugs, muscle, rock and A gripping, uncensored hush-hush look at a bizarre sexual fetish culture with celebrities as you have never seen them before.--Gregg's story transcends all preconceived notions about bodybuilders and even drug dealers. Gregg's life is one that was full of high's and low's as he navigated through the dark, New York City underground, but for years he managed to make his trade and bring in incredible amounts of money. But after the loss of the one woman he truly loved, Gregg's own death seemed the only escape from the hell he suddenly found himself a part of. Gregg was totally lost in the illegal world of sex, drugs, and money that eventually came crashing down on him. Gregg’s arrest was headline news and the image of him being lead off to jail was on every news show in America and even overseas.
The story of Gregg Valentino can be summed up in short: infamous for his 'World Record' holding body, haunted by his past, rebuilding his future. It's a true tale about one man's notorious fall from grace—from success and wealth—into the deepest, darkest pits of hell on earth. And even when some of his friends turned their backs on him he held to his own street ethics, took the heat, and lost it all. But when the dust settled, Gregg rose from the gutter to become one of the world's most infamous celebrities.
Posted by DAILY FILM FORUM at 2:21 PM