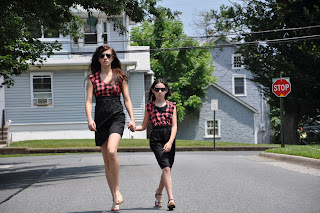 Produced by Silly Sisters Productions "Maggie Marvel" is a dark comedy about a single mom who moonlights as a contract killer for extra money, and finds she's very good at it. A single mom never has it easy. Maggie Marvel must balance career and family, murder and math homework. She's pushed into a dangerous world, only to find she's very good at it. Maggie's daughter, Samantha, worries constantly about her mom. She never knows if she is going to come home and has to fend for herself all the time. Things really get interesting when Samantha gets caught in the middle of Maggie's world.

One of the things that strike our interest on this film was how it was created. Silly Sisters Production Company is unique because it is a family run company. Jeanne Brennan is the producer and cinematographer, Dan Brennan is the writer/director and two children, Sabrina and Diana, are supporting actors in the film. The story is very inspiring because basically, out of the Brennan’s living room, their family has now produced its second successful independent film. Their last film, 'The Video Guys', was a tremendous success, and we booked a worldwide distribution deal with the very prestigious company, Curb Entertainment. Be sure to keep your eye out for Maggie Marvel starring - Selene Beretta, Katherine Barron, Dan Brennan, Chris Douros, Sabrina Brennan, Sam Whitten, Dasha Kittredge, Russ Camarda and introducing Diana Brennan Produced by Jeanne Brennan, Associate Producer Antoinette Lipton Written and Directed by Dan Brennan.
For more info on Maggie Marvel log onto; www.MaggieMarvel.com
Posted by DAILY FILM FORUM at 12:01 AM