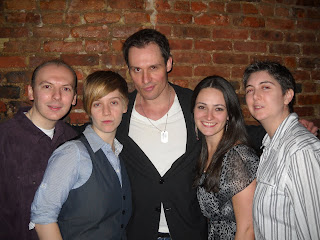 On Saturday May 21st, we were lucky to nab an invite to the exclusive wrap party for "The Coffee Klash", the latest film project by Mattioli Productions. The party was held at Foundation, a hip and trendy celebrity Hot-spot located on the lower east side of Manhattan. Cast members and crew celebrated with their friends in a wild and entertaining night.

The evening was brimming with excitement as the cast celebrated the completion of the short film. The film centers around a young lesbian (Wynn Van Dusen) who not only comes out to her mother (Blanche Baker) at a LGBT coffee shop, but introduces her to a new girlfriend (Samantha Artese). This smart and witty comedy comes after Jana Mattioli's last film "Bidentity Crisis" which stars Elissa Goldstein (An Affirmative Act) and Edvin Ortega.

Director Jana Mattioli ("An Affirmative Act", "Bidentity Crisis") was thrilled with the project "We couldn't have asked for a more talented cast and crew," Mattioli praised. "And I'm really grateful for their work and dedication."

The cast (pictured left to right: Steve Wolf, Julia Weldon, Keith Collins, Samantha Artese and director Jana Mattioli) allowed their comedic talents to shine in the film. "It's a great mix of comedy and sincere adherence to being who you are. I'm just really proud!" She should be, especially since her creative voice is being raised for the LGBT community with this and her other groundbreaking films.

A blast was had by all in attendance, and the club was pumping with loud energy. The cast of "The Coffee Klash" couldn't have asked for a more exciting night!
log onto; www.CoffeeKlash.com for more info on this hilarious new film.
Posted by DAILY FILM FORUM at 12:00 AM