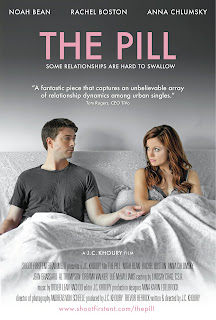 THE PILL
A film by J.C. Khoury


Feature film THE PILL will have its bicoastal world premieres at indie film fests DANCES WITH FILM in Los Angeles on Tuesday, June 7th and GENART in NYC on June 12th.

Written and Directed by J.C. Khoury an award-winning commercial director whose work is in the permanent collection at the MoMA, THE PILL stars Noah Bean (Damages, Morning Glory), Rachel Boston (500 Days of Summer), Anna Chlumsky (In the Loop), Al Thompson (The Royal Tenenbaums), and Dreama Walker (Gossip Girl).

It happens. You meet someone at the bar, one thing leads to another, and the next thing you know you're waking up wondering (and potentially regretting) exactly what took place the night before. Such is the case for Fred, who starts to panic when his free-spirited one night stand, Mindy, informs him that she's not on birth control; but for some reason isn't too concerned. Determined not to become a father, Fred spends the day with Mindy under the guise of pursuing a serious relationship to make sure she takes both doses (taken 12 hours apart) of the morning-after pill.

The result is an all-day adventure filled with socially awkward situations and untimely roadblocks as Fred struggles to preserve his New York City world. With a resolution finally in sight, the no-boundaries Mindy starts to grow on the overly anxious Fred, forcing him to make a decision that will change the rest of his life.

A portrait of young singles in New York City, The Pill examines the immediate ramifications of casual dating in a poignantly funny, fresh, and honest fashion.