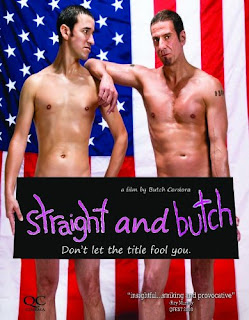 In 2007, popular, gay Philadelphia TV host Butch Cordora (In Bed with Butch) had a vision: to publish a calendar that recreates iconic photos in pop culture. The catch? The photos would feature Butch along side a cast of exclusively straight male models. The second catch? They would all be posing nude.

Watch as Butch and his team of photographers, models and assistants strive to restage everything from Rolling Stone covers to Beatles album art, all the while confronting public indecency laws, a painstaking model search, and creative conflicts — not to mention occasional stage fright. Straight and Butch presents an often-hilarious behind-the-scenes glimpse of the creative process as it uncovers the naked truth about how much common ground exists between men who play for different teams.

To purchase a copy and for more info log onto www.BreakingGlassPictures.com
Posted by DAILY FILM FORUM at 12:00 AM