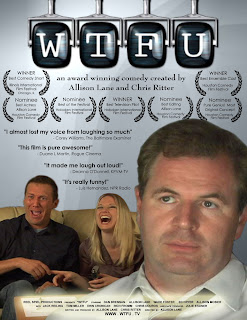 WTFU is a hilarious new comedy from writer/director Allison Lane that busted me up more times than I can count. It is that rare comedy that is just as brilliant the second time around as it is the first (if not more so).
With a deeply twisted plot and filled with some of the best one-liners I've heard in ages, WTFU is a comedy revelation. Imagine an even smarter and far more subversive red-headed stepchild of 30 Rock and you'll begin to get the idea.
The basic storyline revolves around television producer Dave Grayson (Dan Brennan), the successful nice-guy who must turn to his dark side in order to get out from under the thumb of his tyrannical boss Sheamus Goldenblatt (Ed Cryer).
The Pandora's Box that Dave opens comes in the form of Patty Foster and Hudson Lane (as played by the wondrous duo of Allison Lane and Wade Foster). Patty is a catty nymphomaniac and Hudson is a tone-deaf former child star. These descriptions merely scratch the surface as to just how terrifically horrible these two characters are. I wouldn't want to spoil what happens when the two are assigned to broadcast a live morning chat show, but it is lightning in a bottle and can be watched over and over again. It made me wish that future episodes would be made available "A.S…As Possible".
Of note, Ed Cryer’s cantankerous, wily boss is a real standout. Jack Reiling, as the tortured segment producer, is also one of the comedy's many highlights. Allison Lane is beyond hilarious, as is Wade Foster. As the show’s lynchpin, Dan Brennan turns in a spot-on performance with impeccable comedic timing and dead-on reactions.
Really, though, the entire ensemble cast of WTFU is terrific and are all given room to shine. WTFU is a crisply directed, tightly edited and wonderfully written comedy. It isn't for kids, or for people who like their comedies politically correct, but for the rest of us, it is not to be missed. To check out the film's trailer and get screening information, go to: http://WTFU.tv. WTFU is based on the hit web series The Morning Bitch (http://morningbitch.com).
Posted by DAILY FILM FORUM at 4:25 PM