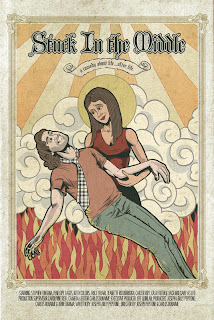 The buzz is out that the hilarious highly talked about comedy film “Stuck in the Middle” will have its World Premiere Saturday June 4th at the 2011 Hoboken International Film Festival. The film has been anticipated as one of the “ones to watch” for breakout comedies of 2011. With solid acting performances from a compact dynamite cast with fantastic directing, this film proves it has what it takes and certainly does deliver. A comedy about life, after life "Stuck in The Middle" follows the "afterlife" of A mail room slacker who accidentally kills himself in a bizarre experiment and finds himself sentenced to Purgatory working in the mail room. There, he falls for his beautiful manager and to win her heart he must stop a greedy real estate mogul for selling Purgatory and sending everyone to Hell.
We give this film 4 stars and recommend highly. With so many comedic punch lines and great on screen deliveries “Stuck in the Middle” rates on the top of our list as a must see. “Stuck in The Middle” Stars Stephen Fontana, Penelope Lagos, Jack Mulcahy, Keith Collins, Jeanette Roxborough, Eric Etebari and Cash Tilton. Written by Joseph and Billy Pepitone Produced by Film veteran Jeff Quinlan of (Bare Knuckles, Polycarp & IMurders) and is directed by Joseph Pepitone (Nephew of NY Yankee great Joe Pepitone) and Co-Directed by Carlos Duhaime. “Stuck in The Middle” - a theological slacker comedy! For screening times and tickets to attend the premiere of “Stuck in the Middle” log onto www.HobokenInternationalFilmFestival.com for more information
Posted by DAILY FILM FORUM at 2:27 PM