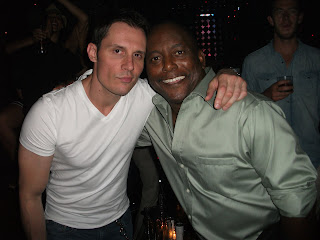 Baseball Legend and former NY Yankee Billy Sample with Actor Keith Collins at the Samsung Hope for Children charity event after party at NYC Hotspot Greenhouse. Sample has been celebrating taking home the best screenplay award at the Hoboken International Film Festival for his upcoming script which he inked called Reunion 108, while Collins has been loathing in the success of his highly talked about comedy film “Stuck in the Middle” which will be out this fall.
Posted by DAILY FILM FORUM at 8:51 PM