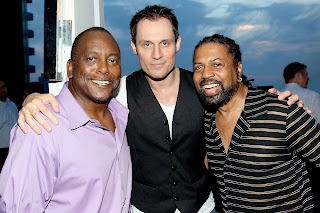 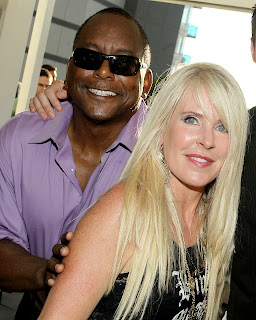 
Catering to the entertainment industry, Retro Sunset happy hour at NYC hotspot XVI is providing the oasis where guests can mingle, sip on cocktails all while watching the sunset over the Manhattan skyline. The retro event is often co-hosted by celebrity guests. This week brought on Former New York Yankee Billy Sample along with co-hosts celebrity photographer/Legendary Studio 54 DJ Steve Mack and Indie Film Star Keith Collins.
Also in the crowd was Top 40 Billboard Recording Artist Kim Cameron, Warrington Gillette (Jason from Friday The 13th) and Village People Cop Ray Simpson. Billy Sample was selected as Most Versatile of his graduating high school class and playing in the major leagues didn't temper his versatility. Completing articles for publication, something he did while still an active player, became a centerpiece for expression after his baseball career, which covered three teams (Rangers, Yankees, Braves) in nine seasons,1978-86. He had articles published in Sports Illustrated and the New York Times, as well as becoming one of the inaugural columnists at Baseball (Sports) Weekly. In 2011, he enhanced his portfolio by penning his first screenplay "Reunion 108", with structural help from his producer/writer son, Ian. The screenplay took top honors at the Hoboken Film Festival and two years later he is ready to join the ranks of Ron Shelton and Jim Bouton as former professional baseball players who have become filmmakers. Reunion 108 is an edgy, satirical, comedy emanating from the gathering of two different generations of minor league baseball players returning for a reunion game. What happens before the game takes us to places movie audiences and even most ardent baseball fans have never seen; that much is guaranteed. In a few weeks, we'll see you at the theaters for a glimpse of our National Pastime, 'Sample Style' ...
Posted by DAILY FILM FORUM at 2:02 PM