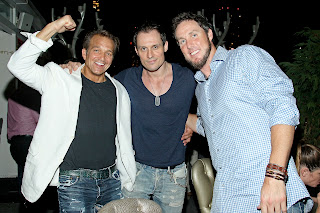 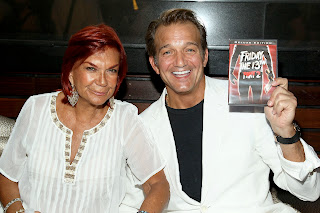 Making the rounds with his new project “BLOODY SOCIAL” NIGHTMARE IN PALM BEACH, FLO. – SEX-MURDER-MONEY-DRUGS- “ Blood Is Thicker Than Money”
Actor/Producer/ Entrepreneur, F.Warrington Gillette has created this Hamlet like Hitchcockian nightmare, in pursuit of justice, loosely based on the sudden and mysterious death of his own father in Palm Beach, Florida, on Friday the 13th. As an actor he already rampaged Camp Crystal Lake in an unstoppable fury before, as “ Jason Voorhees,” in Friday the 13th II, seeking revenge over the death of his “Mommy”, so why not “Daddy” as well in a Palm Beach nightmare?

This epic takes place in Palm Beach, a city of unlimited sex, money, polo, drugs and death. A pristinely beautiful barrier island-the costliest four miles of real estate in the world! Populated entirely by the idle rich, where the only job is keeping up appearances and the governing rules are those of etiquette, snobbery, and bigotry. A place where Jews and Blacks are not allowed in the clubs, but the blackest hearts thrive and where the white sandy beaches and blue water of the Atlantic are about to run blood red.

This multi-dimensional film, delivering a strong message with redeeming social value ,is a modern extension of heroic tragedy loosely based on a contemporary true story. Audiences will identify with the theme of greed gone wrong, political corruption in high society and its deadly consequences. They will cheer for their new sympathetic vigilanti seeking revenge over the wrobful death of his father. It is believed his heiress step-mother, “ The Black-Widow”, poisoned him and headed to the Cote de Azur to marry her new latin lover to pursue a new love and to protect her vast fortune. Society of course looked the other way but the conspirators of the crime would soon regret it…….che che che.

The film project has already garnered significant national media exposure and brand publicity, from coverage in national magazines, newspapers, internet blogs and a Disney book, while in development due to the unique controversial nature of the story and its affiliation with a true Palm Beach scandal.

The island for the super rich will soon become BLOODY SOCIAL.
Visit www.WarringtonProductions.com for more info.