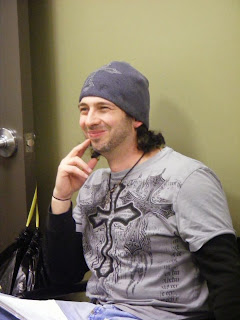 Joseph Pepitone is a two time Emmy winning writer and co-director/co-writer of the award winning film Stuck in the Middle. We caught up with Pepitone who isn’t in hell yet, but soon to be as he is now currently in full swing of pre-production for his new outrageous comedy film “The Jersey Devil”.

DFF: Your first film, Stuck in the Middle, was a big indie success. It won a bunch of awards and the reviews are outstanding. Are you happy with how it all turned out?

JOE: Yeah, Stuck turned out really great in the sense that when we started we had no idea what to expect. To get the movie a distribution deal and be available on Amazon and other outlets soon to come it was way beyond our expectations. So for the next one, the bar is raised a lot higher.

DFF: What is next?

JOE: Well, since Stuck in the Middle took place in Purgatory, My brother Billy and I decided to go to Hell this time (laughs). We are currently in pre-production for The Jersey Devil and will start principal photography in February 2014.

DFF: What is The Jersey Devil about?

JOE: It’s a comedy. The Original Devil’s term limits are up and a new Devil is taking the reigns. But he is unhappy with the direction of Hell so he starts to change its image. That includes relocation and after an extensive search, they wind up in New Jersey.

JOE: Because that’s where I live and it will be an easy commute (laughs). But also, Jersey is a state with personality. Its blue collar and I always felt like Jersey has a sense of humor. It’s like your buddy whom you go back and forth insulting each other. But no one takes it seriously or gets mad. There’s a lot of comedy to get from New Jersey.

DFF: When will The Jersey Devil be available?

JOE: We are looking at a late 2014 worldwide release. You can check out our production company’s website www.diamondjesusproductions.com for all info & updates or follow us on twitter @theJerseyDevil2.

INTERVIEWER: Thank you for your time and as big comedy buff’s we look forward to seeing The Jersey Devil!