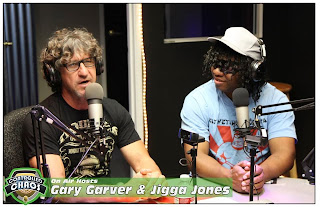 Radio veterans Gary Garver and Jigga Jones, aka "Nipsey Tyrone Washington", are set to rev up mornings at KCAA 1050 AM Radio breginning November 4th. The show is called "Controlled Chaos" and the hosts promise to take their cues from the title.

For more than a decade, Gary Garver was Howard Stern's Hollywood reporter who asked embarrasing questions of the stars. Jigga Jones has a successful business which began with YouTube videos that depicted various 'staged" nafarious encouters with law enforcement and the general public. Both men are natural entertainers who will bring a unique brand of humor to Southern California Radio. Eventually, Gary Garver's interviews of Hollywood stars resulted in threats of law suits and Garver's dismissal from Stern's organization. Jigga Jones, who brands himself as "America's # 1 Negro" brings a steriotypical character the airwaves that's politically incorrect, to say the least.

The concept for the show began when Jigga Jones was a guest on Gary Garver's Friday night show on KCAA. Fred Lundgren, the station's ceo, happened to be listening to the show when Jones was a guest. Lundgren thought their synergy could become the basis for a morning show, and after after several months of discussions and planning, the station signed an agreement with Garver and Jones for what should be a totally new brand of morning show entertainment. Lundgren said he offered these men a morning show because they are natural entertainers who have mastered their craft, making the sum of their talents much greater than their indiviual parts.

Listeners can expect Gary Garver to combine his wit with Jigga Jones' gift of the gab for a combination that should have listeners rolling with laughter.Garver states, "The spirit of local radio was killed by corporate suits who didn't understand radio or give a damn about the radio industry or the listener. Today, radio is all about profit and our industry is paying the price. Garver adds, "Controlled Chaos will reconnect listeners to radio as it was before corporate owners destroyed its creativity". The show will air weekdays from 8 to 9 a.m. on KCAA 1050 AM in the Riverside/San Bernardino market.