MACK IS BACK!! Celebrity Photographer Steve Mack Returns to the GingerNewYork TV Show in NYC 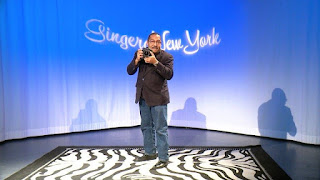 Steve Mack - Celebrity Photographer - New York City
Spread the Word
Steve Mack: was born and raised in Manhattan. His career as a world-class photojournalist spans 40 years. Steve is President and CEO of S.D. Mack Pictures, Inc. (a motion picture production company) and Co-Owner of NYC Photo News (a stock photography agency) specializing in royalty free images of New York City and the people who make it the most dynamic place in the world.

At the age of 10, taught by his uncle, a professional news photographer, Steve began taking pictures professionally of crime and accident scenes for his father and prominent Criminal Defense Attorney, Ruben H. Mack (associated with the firm of Stevens, Hinds & White, PC). Professional event coverage included photos at numerous charity functions for The New York Chapter of the Barrister's Wives, chaired by Steve's mother and former Board of Ed School Teacher and charity fundraiser, Learline B. Mack. In the later years, Steve covered Red Carpet events and concentrated on Entertainment and Music, shooting concerts and portraits of various recording artists. One of the highlights of Steve's career was getting a wedding picture featuring Luther Vandross published in Rolling Stone Magazine.

Steve spent a 3-year stint shooting and editing news programming for the Office Of Communication of the United Church of Christ, involving travel all over the United States and a trip to the U.S.S.R. before the fall of the Soviet Union. Steve's love for the moving image opened up opportunities leading to work producing documentary style videos at high end weddings, corporate events as well as music videos for MTV.

Endorsements:
Mara McLaughlin - Entertainment News Assignment Editor, Getty Images/FilmMagic "I signed Steve Mack on as a Contributor to Getty Images without hesitation. He is an amazing photographer, able to make great images from sometimes less than ideal locations. He just knows how to work a red carpet. While being very organized with his schedule and professional in terms of which assignments he will take, he is flexible and willing to pitch in for the greater good of the whole company."

Sara Herbert-Galloway - Actress, Charity Consultant, Photojournalist "Steve and I have worked together on countless occasions, usually charity events in Manhattan and the Hamptons. Steve has tremendous attention to detail. He often has the photos uploaded to Getty or Filmmagic and posted on the web before the event is over! No waiting for your photos with Steve Mack...he moves fast. Steve is very personable and easy for everyone to work with. I highly recommend him!"

GingerNewYork can be seen in Manhattan on Time Warner Cable Channel 34 and HD Channel 1993, Fios Channel 33, and RCN Channel 82, every Friday afternoon at 2pm EST.  It can also be seen live streaming on the Manhattan Neighborhood Network's website, www.mnn.org, Channels 1 and 5.
Posted by DAILY FILM FORUM at 3:11 PM