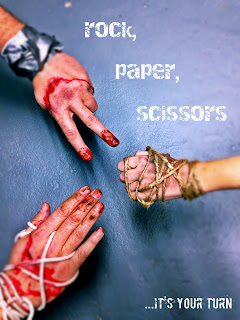 "ROCK PAPER SCISSORS"SET TO TAKE YOU ON ONE WILD THRILL RIDE
Award-Winning Team Begins Shooting in New Jersey August 2016
“How will they know when they've won”
Production is announced today for the frightening new Thriller feature film "Rock, Paper, Scissors." Director Doug Bollinger(“Waltzing Anna”, “Mail Order Bride”) takes you on a violent, psychological ride that pushes a simple suburban couple to the extremes and forces them to answer the question: How far would you go to get back the love you once had?
“Rock, Paper, Scissors” tells the story of Sam and Missy Wagner whose once romantic coupling has lead them to now go through the motions of a mediocre marriage in a peaceful suburb. Their simple lives are thrown into a vicious tailspin after they are victims of a horrific event. They must navigate through treacherous, unknown territory in order to get back what they once had. Will the journey break them or revitalize their bond?
Starring: Timothy Laurel Harrison ("Out of my Hand"), Jeff Riberdy (“Half a Dozen”), Angela Sharp (“Gravedigger”), Gervase Peterson (“Survivor”), Keith Collins (“The Meat Puppet”), Michael Billy (“Clean Cut”), Annelise Nielsen (“The Samaritans”).Directed by, Doug Bollinger. Produced by, Doug Bollinger, Josh Lee, Keith Collins, Ashley Steele (“Dark Blue”). Written by, Doug Bollinger & Josh Lee. Cinematography & Edited By, Cory Green (“The Jersey Devil”).