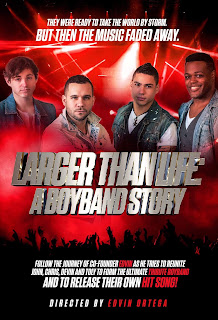 Shami Media Group, Inc. is pleased to announce the worldwide release of the award winning documentary film "Larger Than Life: A Boyband Story"

Shami Media Group, Inc. a distribution, marketing, and media leader in worldwide film distribution has acquired and released the documentary which is currently streaming on Amazon VOD.
https://www.amazon.com/Larger-Than-Life-BoyBand-Story/dp/B071WCVR11/ref=cm_cr_arp_d_product_top?ie=UTF8

Shami Media is led by film veteran Bob Shami who has been in the film distribution business for over 20 years. Their movies are currently found in retailers such as, F.Y.E., Best Buy, Tower, Barnes & Noble, Amazon, Sears, Kmart, MVD, Walmart, Target, Baker & Taylor, Red Box, iTunes and Netflix. They will now be adding Larger Than Life: A Boyband Story to their catalog of outstanding films.

From Co-founders Edvin Ortega ("Orange Is The New Black", "The Jersey Devil") and John Wagner comes "Larger Than Life: A Boyband Story"

The film not only takes a close look at what is like to be a tribute artist in New York's cut throat music scene, but it depicts the journey of co-founder Edvin Ortega as he tries to reunite John, Chris, Devin, Toly and others to not only form the Ultimate Boyband Tribute, but also relaunch their once promising careers as an original pop group.

It was the late 90’s and The Boy Band craze was at its peak. Backstreet Boys, N’Sync, 98 degrees were ruling the charts. Larger Than Life, the next great boy band was ready to take the world by storm. But then the music faded away. Justin left N’Sync. Backstreet didn’t come back and 98 Degrees cooled off. But now, the group is ready to make their big comeback and achieve the success they came so close to getting. Follow the journey of co-founder Edvin as he tries to reunite John, Chris, Devin, Toly and others to form the Ultimate Boyband Tribute band and to release their own hit song! For this boy band it’s a Brand New day!