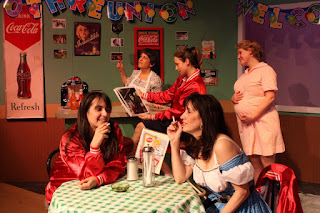 Award winning Film Director/Producer and owner of Mattioli Productions, Jana (AJ) Mattioli tries his hand at the transgender play Come Back to the 5 & Dime Jimmy Dean, Jimmy Dean opening March 9th at the Darien Arts Center. After watching a dress rehearsal we were able to speak with AJ for a bit and found out that Darien CT is not at all what he expected. He states “The talent in this cast can compete with most in NY.” “On top of the talent there is just dedication to the show and making it a success.” The gratitude expressed for antiquedress.com owner Deborah Burke for supplying all the costumes for the show. Deborah plays Sissy in the play and looks dynamite in her costume!
Jana (AJ) Mattioli’s directorial film debut of An Affirmative Act starring multiple Academy Award and Emmy winners and nominees, had a very successful national theatrical release in 2011. Mattioli was recently awarded for producing the “Best Comedy Short” at The Downbeach Film Festival in Atlantic City for the hysterical film, Bidentity Crisis. The film also brought home an award for Best Actor in a Short for Keith Collins (Awake In the Woods, A Fight For Survival) and nominated for two additional awards; Best Actress in a comedy short (Elissa Goldstein) and Best Director in a comedy short.
Mattioli Productions, known for serving the LGBTQ community with groundbreaking work in movie production is run by the driven and passionate Jana (AJ) Mattioli (recently honored in the Advocate as “40 People Under 40 to Look Out For.”) Directing plays like this one--with such sensitive yet timeless sexual orientation subject matter as being transgender in the 1970s--is what Mattioli Productions is all about. Educating, exposing, and entertaining for the beloved community with pride, love, tolerance and understanding is vital to this edgy director of stage and film.
To donate and follow Mattioli Productions upcoming Theatre, Films, and Events please visit them at:
www.mattioliproductions.com
Come Back to the 5 & Dime, Jimmy Dean, Jimmy Dean
By Ed Graczyk
Directed by Jana Mattioli
Stage Management by Matt Mullen