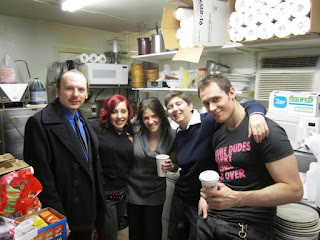 (Behind the scenes with - Wolf,Kapchinske,Goldstein,Mattioli & Collins)

The Coffee Shop tells the story of the The Cup coffee house, a gay hotspot, its workers, its regulars, and the drama it has to deal with every day. There's the owner of the shop, the fabulous Bea Reasonable (Dallas Dubois) and the flamboyant boy-crazy gay waiter, Jamie (Keith Collins). There's also Chase (Steve Wolf), the slimy creeper looking for some fun. And then there's Helen (Elissa Goldstein), a straight girl with a penchant for drama.

The drama starts when Helen meets her bisexual boyfriend Phillip (Edvin Ortega) at The Cup for a date. Hilarity ensues when their date goes awry and a water fight breaks out. And it only gets funnier from there. The Cup becomes the place for awkward coming out stories, hook-ups in the bathroom, and vampire meetings. The drama culminates when Helen enters the coffee house again to take down Josh (Bobby Walker), the man who stole her man from her. It's an LGBT comedy guaranteed to make you laugh!