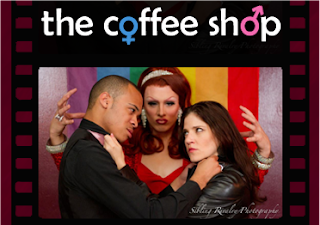 This movie is quite unique with its episodic style as we follow the characters’ intertwined journeys throughout. The Coffee Shop is a gay owned restaurant catering to everyone in the community ranging from fabulous drag queens, to flamboyantly gay waiters, lipstick and butch lesbian waitresses, patrons questioning their sexuality and of course some bi-sexual vampire cult members.

Baker plays an overbearing mother to real life daughter (Wyn Van Dusen) who is coming out of the closet to her. Baker’s unconventional reaction to this news is delightfully farcical as she is most upset that her daughter is not the “right kind” of lesbian.

Goldstein plays Helen, a straight woman dating a bisexual man who leaves her for another man driving her to question her own sexuality as she is driven to search for love with another woman.

Collins plays Jamie, a flamboyantly gay waiter at The Coffee Shop always observing and judging the relationships and drama unfolding around him all the while getting others into trouble merely by his fabulous existence.

The cast consists of an additional twenty hilarious supporting actors creating a fantastic environment for this playful comedy.

Mattioli Productions, known for serving the LGBTQ community with groundbreaking work in movie production is run by the driven and passionate Jana (AJ) Mattioli (recently honored in the Advocate as “40 People Under 40 to Look Out For.”)

Mattioli was recently awarded for producing the “Best Comedy Short” at The Downbeach Film Festival in Atlantic City for the hysterical film, Bidentity Crisis. The film also brought home an award for Best Actor in a Short for Keith Collins and nominated for two additional awards; Best Actress in a comedy short (Elissa Goldstein) and Best Director(AJ Mattioli) in a comedy short.