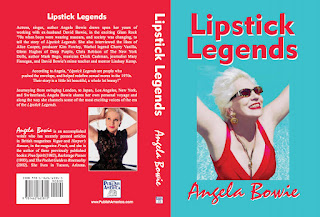 The New York City Signing and after party celebration is at Soho's hotspot "Lair" Friday night hosted by actor Keith Collins. Those who make it past the velvet ropes will be able to meet, greet and purchase Bowie's new book "Lipstick Legends" which has been making waves around the US.
Rock’s Legendary Angie Shares Her Past and Interviews Glam Rock Legends
Alice Cooper, Kim Fowley, Cherry Vanilla, and Glenn Hughes of Deep Purple

Actress, singer, author Angela Bowie has just signed a publication contract for Lipstick Legends, her time machine voyage to the era of the 1970s when Glam Rock was all the rage. Drawing upon memories of her experiences with ex-husband David Bowie, Angie uses her own life as a vantage point from which to interview the likes of Alice Cooper, producer Kim Fowley, Warhol legend Cherry Vanilla, Glenn Hughes of Deep Purple, Chris Robison of The New York Dolls, author Mark Bego, musician Chick Cashman, legendary journalist Mary Finnegan, and David Bowie’s mime teacher and mentor Lindsay Kemp.
According to Angela, “Lipstick Legends are people who pushed the envelope, and helped redefine the sexual mores of the 1970s. They were people, like myself, who lived during most indulgent and vibrant decade of the Twentieth Century. I am thrilled to share the spotlight of Lipstick Legends with such a glittering cast of characters. It’s a little bit beautiful, a whole lot brassy!”
Drawing upon her years as a writer and performer, Angela takes the reader into the room with her in a way that is conversational and informative, and channels an entire era.
“Are you a “Lipstick Legend?” asks Ms. Bowie. “I bet you are. Did you dance all night and party until breakfast, front a band, and get all dragged up? Did you march and protest, fall in love, or swoon at David Bowie shows? Are you threatening to relive the exhilarating panic times of Glam Rock, and the squealing tires of adrenaline entertainment? Were you there with me on the dancefloor of the Sombrero in London? I bet you were! Were you with me those six nights of sold-out concerts at Universal Amphitheater? Wherever you were, come with me and relive those gay old days. Plunge into that pool of ecstasy with me one more time.” If you are looking for something different, Lipstick Legends is it.
Lipstick Legends is available now by Publish America, and will be available on Amazon.com and BarnesandNoble.com globally.
Angela Bowie has recently penned articles in British magazines Vogue and Harper’s Bazaar, on the internet magazine Frock, and she is the author of three previously published books: Free Spirit (1982), Backstage Passes (1993), and The Pocket Guide to Bisexuality. She has recently relocated from Tucson to Atlanta.
Posted by DAILY FILM FORUM at 9:45 AM