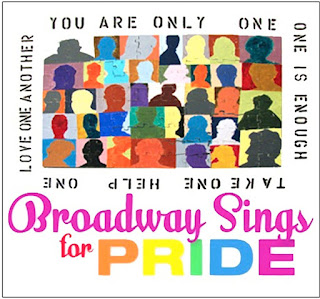 Celebrities, activists, and over 15 members of the Broadway community will come together in Manhattan for a special one-night-only benefit concert, which includes pre-show reception at starting at 6:00pm. The pre-show reception will feature DJ Jimmy Prada (http://www.jimmyprada.com/). For a preview of the show, please watch the Danny Jordon-directed video: http://tinyurl.com/7kmum63.

Broadway Sings for Pride’s Second Annual Gay Pride Concert will feature rousing songs from Broadway and pop, as well as feature stories of LGBT pride as told by celebrities, activists and the TADA! Youth Theater. The event will be held at the Mainstage Theatre on 42nd Street in New York City on Monday, June 25, 2012 at 7pm. The concert will benefit the Hetrick-Martin Institute, The Lesbian, Gay, Bisexual & Transgender Community Center of New York City and Broadway Sings for Pride.

Neal B of www.NealB.tv will co-produce the event with Jim Lahti, in association with Artists Proof Productions. Jim Lahti also will serve as the musical director/arranger and pianist. He will be joined by John Benthalon on acoustic and electric guitar, David Silliman on percussion and Ritt Henn on bass guitar. The technical director is Dwight Schneider.

Broadway Sings For Pride is a non-for-profit organization which brings together Broadway talent and celebrities to promote LGBT equality through song. Launched in June 2011, we have received support from Carol Channing, Bebe Newirth, Joy Behar, Colman Domingo, Megan Hilty, Lance Bass, Johnny Weir, Brian Stokes Mitchell, Dee Snider, The Real Housewives of NY and many others! Broadway Sings for Pride is a sponsored project of Fractured Atlas, a non­profit arts service organization. Contributions for the purposes of Broadway Sings for Pride must be made payable to Fractured Atlas and are tax­ deductible to the extent permitted by law. Please visit us on the web at: http://www.bwaypride.org/ or on Facebook: Broadway SingsFor Pride.

The Lesbian, Gay, Bisexual & Transgender Community Center has grown to become the largest LGBT multi-service organization on the East Coast and second largest LGBT community center in the world. Every week, 6,000 people visit the Center, and more than 300 groups meet here. They provide groundbreaking social service, public policy, educational and cultural/recreational programs. They also serve as an incubator for grassroots groups that meet here such as the AIDS activist group ACT UP and the Gay & Lesbian Alliance Against Defamation (GLAAD), the principal organization combating homophobia and stereotyping of gays in the media.

The Mainstage Theater is located in Manhattan at 416 West 42nd Street, between 9th and 10th Avenue. For more tickets and information, visit: http://tinyurl.com/7rkfzym. Ticketing services provided by Ticket Central, 212 279-4200, Noon to 8pm Daily. More information can also be found at http://www.bwaypride.org/ or on Facebook: Broadway SingsFor Pride.
Posted by DAILY FILM FORUM at 12:01 AM