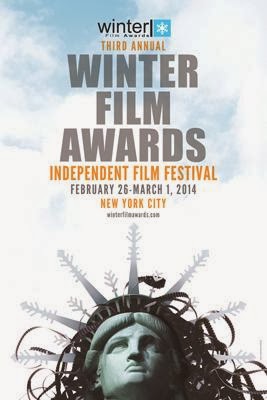 Local Independent Film Festival Winter Film Awards (WFA), now in its third year, is establishing itself as a staple within the NYC arts community and a worthy stop on the US film festival circuit for out-of-state and international filmmakers alike. Opening night for the 2014 Winter Film Awards Independent Film Festival will take place February 26 with a filmmaker’s reception and kick-off party, and the festivities will continue February 27-March 1 with three days of film screenings at the Blue Diamond Theater (777 8th Ave New York). The festival will come to a close on the evening of March 1st with the Official Winter Film Awards Ceremony and Gala After-Party.

The WFA team is proud to announce programing for their upcoming Festival and Awards Ceremony. This year the WFA submissions committee was gratified by the high number and outstanding quality of submissions received. After reviewing hundreds of films and painstakingly judging each on a number of technical and artistic criteria, the committee crafted a program sure to interest a wide audience. Among the 61 Official Selections to be screened this year, there is a diverse mixture of documentaries, shorts, narrative features, animation, music videos and horror films, including 8 student films, 17 female directors and representation from over 20 countries.

Highlights of this year’s festival include “Not Anymore: A Story of Revolution“, an outstanding short documentary about the Syrian uprising, directed by former Gaddafi prisoner-of-war Matthew VanDyke, which has won 32 festival awards so far, the world premier of “Hipster! the Musical” by first-time director Adam Blair, Wild Rose Independent Film Festival Best Editing winner “Closing Bell,” Shockfest 2014′s Best Horror Feature ”The Gauntlet“, lovely award-winning documentary short “Herd In Iceland“, Belgian and UAE film “Baghdad Messi” which has won over 20 awards in festivals all over the world, and Tribeca Best Short Nominee- Cody Blue Snider’s “Fool’s Day” which has taken a number of titles in festivals throughout the country. Additionally, the winning films from the recent 2013 Winter Film Awards 48-Hour Film Challenge willl be screened at the festival.

Winter Film Awards (WFA) is a volunteer-run and operated celebration of the diversity of local and international film-making. The WFA Mission is to recognize excellence in cinema and to promote learning and artistic expression for people at all stages of their artistic careers with a focus on nurturing emerging filmmakers from around the world. WFA is proud on their diverse collection of Festival selections, allowing audience to enjoy films they normally would not get a chance to see. Winter Film Awards screenings will be held Thursday, February 27 – Saturday, March 1 at the Blue Diamond Theater (777 8th Ave New York), The Awards Ceremony and After-Party will take place Saturday March 1 at 8pm at The Empire Room at 230 Fifth (230 Fifth Ave, New York, NY 10001). Original artwork for the 2014 Winter Film Awards was designed by award-winning artist and educator Viktor Koen.

For more information on tickets, schedules, sponsors, film descriptions and more, please visit www.WinterFilmAwards.com and find us on Facebook.