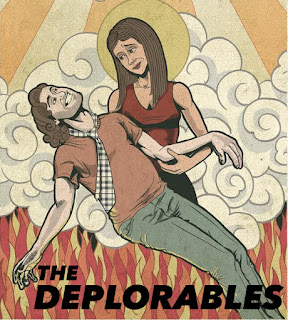 Diamond Jesus Productions announced today that production of the new comedy web series, The Deplorables will begin shooting late Spring and will be released on digital platforms in the Fall/Winter.
Millennial mailroom slacker Michael Cheevers dies and is sentenced to Purgatory, to work in …the mailroom. There he meets his flirtatious manager, a demoted St. Peter, a disgruntled secretary and the Boss’ Son (Jesus). Together this dysfunctional team must stop a greedy real estate developer from taking over Purgatory and deporting them to Hell.  But can these snowflakes actually work hard to stop him or will they  just complain?
The Deplorables is based on the film Stuck in the Middle, which won Best Comedy Feature at the Atlantic City Cinefest Film Festival. Stars Stephen Fontana and Penelope Lagos reprise their award-winning roles. Keith Collins (“The Evangelist”), Edvin Ortega (“Orange is the New Black”), Evonne Walton (“The Jersey Devil”) and Charles Goonan (“Smokers”) have signed on with more names to be announced soon.
The Deplorables was created by two-time Emmy winner Joseph Pepitone. The eight-episode arc was written by Joseph and his brother Billy.  “I’m really excited to be heading back to Purgatory with some old friends and some new ones,” said Joseph.  “The Deplorables is going to deal with some new issues that Stuck in the Middle didn’t and our goal is to make Purgatory great again. And since no one from Purgatory has told me of the conditions there, I think we can do it.”