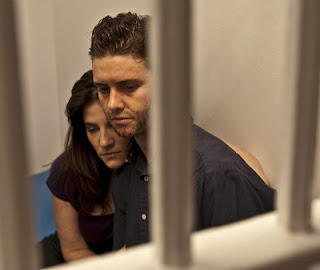 This year, the New Jersey state legislature voted “no” to legalizing gay marriage, followed by its State Supreme Court’s refusal to overturn their decision. Earlier this month, a California court ruled in favor of same sex marriage, shooting down a voter referendum that had outlawed the practice; now, that case will be heard by a higher court. In every state in the union, hotly contested gay marriage battles are being waged in the courtrooms and state houses, with no clear resolution in sight. That is, unless you catch a screening of Kenneth Del Vecchio’s An Affirmative Act, a thought – and controversy – provoking film that has Academy Award written all over it. The cleverly scripted courtroom drama features outstanding performances throughout the cast, some from recognizable names, some unknowns, which attracted bids from numerous mid and high line film distributors. Palisades Tartan Films, a prestigious boutique distributor based in Manhattan and London won, and will release the fiery movie in theaters across the United States this fall.

Poised to join the ranks of To Kill a Mockingbird, And Justice For All, and Philadelphia as one of the greatest courtroom dramas ever, An Affirmative Act offers the viewer a novel-like page turner mystery that is appealing to both mainstream and LGBT crowds. Terry, a bearded, protective husband and Samantha, a pretty working mom, are dealing with the daily, normal life of raising their son Mario and succeeding in their respective professions as an architect and law professor. Ten minutes into the movie, though, the audience is shocked when the couple are arrested, and charged with several counts of fraud. Terry is not a man, but really an attractive woman, played so convincingly masculine by newcomer Candice Holdorf that both characters and audiences are equally jarred by the revelation.

Under false pretenses of being a heterosexual couple, Terry and Samantha married, obtained their benefits and adopted Mario. Why? Because gay marriage is illegal in their home state of New Jersey. Breaking the law, though, has consequences, and the Garden State’s conservative governor (6-time Emmy winner Justin Deas) wants a conviction. A trial, however, would cause a country-wide media sensation, and he can’t have that because the attention could cause his politically necessary anti-gay marriage bill to fail. So he enlists power-hungry county prosecutor Lori Belmont (Blanche Baker; Emmy winner, Sixteen Candles) to offer a quick slap-on-the-wrist plea that seemingly would be a win for all. The ladies, though, decide to fight, and bring in heterosexual lawyer, John DeMine (Eric Etebari; TNT’s “Witchblade”), a move that has its benefits, but also dangers. DeMine, recognized as the state’s leading criminal defense attorney, has built a reputation by successfully defending murderers and drug dealers, most notably the subordinates of the mythical white supremacist “Man in the White Suit” (2-time Academy Award/4-time Golden Globe/9-time Emmy winner and nominee, Charles Durning). The pot starts boiling with the lawyers’ opening statements – and gay marriage is put on trial in America.

There is nothing ordinary in An Affirmative Act, a natural result of its creator Del Vecchio who, by all accounts, fulfills the rare role of a modern-day Renaissance Man: writer/director/producer of 15 star-filled movies; author of bestselling novels and mammoth legal books; founder and chairman of a top film festival; weight-lifting champion; and a former judge, who recently left the bench in a free speech stand. The genius of Del Vecchio’s writing is that he constantly tricks the audience with brilliant twists and turns that, although no one sees them coming, they are nonetheless realistic. In An Affirmative Act, DeMine’s multi-layered character, played perfectly by the charming Etebari, unravels the high stakes conspiracy in and out of the courtroom, teasing his jury and moviegoers with each uncovered element. But it’s the women who throw the hardest and last punch, a twist one is as unlikely to guess as the early-on surprise of Terry’s femininity.

A movie with no apparent flaws, Del Vecchio succeeds best by making a clearly pro-gay marriage movie non-preachy. He does this by examining both sides of the issue, but staying away from self-serving rhetoric and propaganda. A heterosexual lawyer/filmmaker himself, Del Vecchio smartly hired an out lesbian, Jana Mattioli, to direct An Affirmative Act, who undoubtedly brought additional passion into the shooting of this explosive work. Del Vecchio’s casting was equally impressive. Pairing Holdorf with the sensual, intelligent Elissa Goldstein (as Samantha), the writer/producer founded a strong, but likeable couple, that even the toughest conservative would have difficulty rooting against. The cast is rounded out with fine performances by Del Vecchio regulars Jackie “The Joke Man” Martling (“The Howard Stern Show”), Rachael Robbins and Keith Collins, who add comedic moments to the drama; LGBT standouts Randy Jones (Cowboy – “The Village People”), Rob Moretti (Crutch), Jeffrey H. Johns and Greg Jackson; and veteran Hollywood actors Costas Mandylor (Saw movies, The Pledge), Thomas G. Waites (And Justice For All, The Thing), and Robert Clohessy (“Oz”, “Boardwalk Empire”, “Hill Street Blues”), joining the legendary Charles Durning, who always seems to be part of great films.
For more information, please visit www.ANAFFIRMATIVEACT.com and www.JUSTICEFORALLPRODUCTIONS.com.
(photo credit-Matt Petrie)
Posted by DAILY FILM FORUM at 3:50 PM