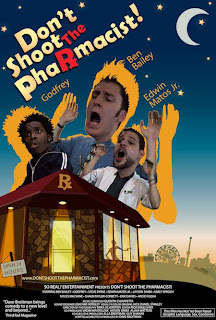 We've seen our share of doctor, nurse, lawyer and cop shows and movies, yet we don't have anything to turn to when it comes to one of our most trusted professionals, the Pharmacist. Turns out, I came across a growing cult phenomenon.

Brooklyn Pharmacist Zack Wright must do everything in his power to simply survive the zany night!

The gifted Ben Bailey stars as Pharmacist Zack Wright, who braves a memorably zany night as he muses about life as a Vegas roulette dealer. Encountering a range of customers, from rude to idiotic, from beautiful to dangerous, Zack and his wise-cracking Pharmacy Tech, Ty (the uniquely sarcastic Edwin Matos Jr.), attempt to make sense of the world they spend half of their life in, at Brooklyn's Goodyear Pharmacy.

Before the shift finally comes to a close, Zack's newfound "self" gets tested to the extreme, as the lives of Zack, Ty and a frequent customer Phil, a slighly manic OCD patient (the sublime Jayson Simba), are put in danger by an armed and desperate man who will stop at nothing to get what he wants.

Godfrey offers up a hilarious performance as the resident pot-head and Ardie Fuqua holds his own as the wittiest robber I've ever come across. Special mention goes out to Myles MacVane for portraying a very entertaining semi-senile two-timer.

This hidden gem of a movie has received numerous good reviews, ranging from Rogue Cinema's quote "This is flat out the single best indie comedy I've seen in a really long time...if not ever" to Third Rail Magazine's quote "Dave Broitman brings comedy to a new level and beyond."

Broitman just may be that next writing/directing comedy genius that we've been awaiting. He's got "Sexcut" and "Moneymaker" in the pipeline and directed several episodes of the new upcoming series "Something About Ryan."

After a brief run in several theaters, this cult hit movie is now available on DVD on Indieflix.com and DontShootThePharmacist.com
Posted by DAILY FILM FORUM at 1:14 AM