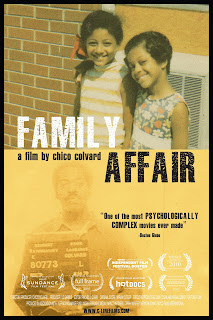 FAMILY AFFAIR directed by Chico Colvard is a feature length documentary that premiered in competition at Sundance in 2010 and was the first film acquired by Oprah Winfrey for her new cable channel, OWN. The film has screened at premiere festivals around the world, winning Audience and Best Documentary Feature awards.

At 10 years old, filmmaker, Chico Colvard, accidentally shot his sister in the leg. This random act detonated a chain reaction that exposed unspeakable realities that shattered his family. Thirty years later, Colvard ruptures veils of secrecy and silence again. As he bravely visits his relatives, what unfolds is a personal film that’s as uncompromising, raw, and cathartic as any in the history of the medium. A story that yields piercing insights about the legacy of abuse and attempts to understand one’s capacity to accommodate a parent’s past crimes in order to satisfy an eternal longing for family.
(photo courtsey of C-Line Films)
Posted by DAILY FILM FORUM at 1:13 PM