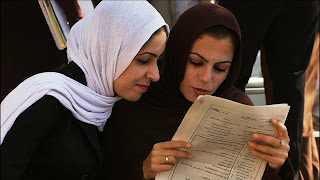 QUEST FOR HONOR
A Film by Mary Ann Smothers Bruni

QUEST FOR HONOR had its world premiere at the Sundance 2009 Film Festival and has played numerous festivals and screenings across the globe including Kurdistan and Iraq. This compelling film is an in-depth look at the "honor killings" of women in Kurdistan and those who are fighting to stop the killings.

The alarming rise in “honor killing,” the heinous act of men killing daughters, sisters, and wives who threaten “family honor,” endangers tens of thousands of women in Iraq, Turkey, Jordan and adjoining countries. Global communication through satellite television, Internet, and cell phones has raised the expectations of young Middle Eastern women, who now are not content to marry a much older relative their father might chooses and live a life of servitude.

While young women respond to new ideas from cyber pals in Los Angeles or episodes of popular Western sit-coms, their fathers and brothers demand strict tribal justice for their acts. Particularly in rural areas women have been killed simply for having unfamiliar phone numbers on their cell phones or speaking to men who are not relatives. The Women’s Media Center of Suleymaniyah, Iraq, has joined forces with Iraq’s Kurdish Regional Government (KRG) to end the heinous practice of “honor killing” of women.

First time filmmaker Mary Ann Smothers Bruni – who is an author and photographer – documents these horrible acts and the people who are fighting to end these senseless killings that take place in Kurdistan in her first feature film QUEST FOR HONOR.

A call to the Women’s Media Center reveals that a woman’s body has been found in a field near Ranya, a border town in the “Wild East” where Iraq, Iran, and Turkey meet. RUNAK Faraj, the center’s leader, and her colleague Kalthum Murad Ibrahim are requested to join local Ranya Police Chief Abudullah at the crime scene. Abdullah’s cell phone shows a most devastating image of a young woman clad in blue jeans and grabbing her hair in the agony of death. The woman is named Nesrin, a young widow dispossessed of her children who has no apparent family close by. Her mother is dead and her father living abroad. No one cares for her, and no one knows who murdered her.

QUEST FOR HONOR follows the tireless media center activists Runak Rauf, Runak Faranj, and Kalthum Murad, as they work with journalists, lawmen and members of the KRG to solve the murder of this widowed young mother, protect the victim of a safe-house shooting, redefine honor, and stop the killing!!
(photo credit SB Productions)
Posted by DAILY FILM FORUM at 12:54 PM