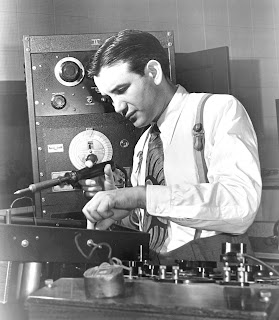 Downbeach Film Festival presents the 2011 Atlantic City Cinefest, October 14 to 16 in The Screening Room at Resorts Casino Hotel. The festival’s opening night film, Deconstructing Dad, documents the life of iconic musician, Raymond Scott, who produced the music for Warner Brother’s classic cartoons, directed the orchestra for TV’s “Your Hit Parade,” and developed the use of technology in music. His work has been used by Motown founder, Berry Gordy, and performed by groups ranging from Rush, Devo, They Might Be Giants, and adapted by the virtual super-group, Gorillaz.

Scott's son, Stan Warnow, directed what was a labor of love. "The genesis of the film was a very specific moment during my dad's memorial service when I suddenly realized that I did feel a traditional son's love for him that I had tried to deny for almost my whole life. And from that awareness came a sense of injustice that he had been essentially forgotten by the public as the years passed, and that many of the wonderful things he had accomplished had never even been publicized at all," said Warnow, who received a Master of Fine Arts from New York University.

Warnow not only has the family pedigree to evoke a music legend, but the filmmaker pedigree as well. He served as editor for musical documentaries Woodstock and No Nukes and the feature musical, Hair.

Deconstructing Dad has attracted praise in the media. Says Leonard Maltin: "This is a fascinating look at a musical genius and the way he lived his life. Stan Warnow allows us to share his journey of discovery as he pieces together the story of his father. I thoroughly enjoyed it."

Among the other highlight is the screening of Standing Silent, directed and produced by Scott Rosenfelt. The exposes the issue of child abuse among Orthodox rabbis in Baltimore. Rosenfelt has produced such Hollywood hits as Home Alone, Mystic Pizza, Teen Wolf and Smoke Signals. The festival will close with the 25th Anniversary screening of “Wise Guys” with co-star Joe Piscopo doing a Q & A.

If you would like to schedule an interview with Mr. Warnow, please contact William Sokolic. Log onto downbeachfilmfestival.org for festival updates, including a complete list of films, the schedule and ticket prices.
Posted by DAILY FILM FORUM at 4:49 PM