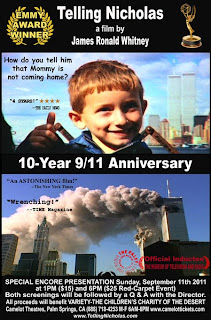 “Honoring the tenth anniversary of the September 11th Attack, Camelot Theatres in Palm Springs will present two exclusive screenings of "Telling Nicholas." A matinee will be shown at 1:00pm and a Red Carpet Evening screening will begin at 6:00pm. Director James Ronald Whitney will appear at both Post-Screening Q&A Sessions. Ticket prices are $15 for the afternoon screening and $25 for the Red Carpet evening show.”

Easily the most powerful documentary on 9/11. Filmmaker James Ronald Whitneys “Telling Nicholas” how do you tell a child that his mom just died? Centered around 7 year old Nicholas Lanza & how his mother had not returned home the day of the tragedy and never did.

Another boy whose parent died in the 9/11 attacks is Thanbir Ahmed, a Muslim teenager whose father, a waiter at Windows on the World, also passed away that day and is focused on in the documentary.

Powerful, Heartfelt, Groundbreaking, Astonishing, Raw and Uncensored A 9/11 movie that gets 4 out of 4 big stars and is a must see for all.

As many as 10,000 children lost a parent on September 11, “Telling Nicholas” is the powerful story of one of them. “Telling Nicholas” 10 years ago premiered to critical acclaim. The documentary won an Emmy, was inducted into The Museum of Television and Radio, and was selected by The Academy of Motion Pictures Arts and Sciences as "One of the most outstanding movies of 2002!" It was also included in the Academy's prestigious documentary series. Proceeds Benefit Variety The Children's Charity of the Desert.
www.TellingNicholas.com
Posted by DAILY FILM FORUM at 6:29 PM