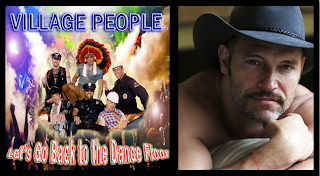 THE VILLAGE PEOPLE TO RELEASE A BRAND NEW SINGLE TITLED "LET'S GO BACK TO THE DANCE FLOOR" & ANNOUNCE A NEW COWBOY TO THE ICONIC GROUP.


The new single, written by KC (of the Sunshine Band) & Chris Cadenhead will be av...ailable on Tuesday August 6, 2013 on i-Tunes, Amazon and more.

The one and only "Village People" will introduce their new single in their live concerts in the US and around the world (Including Cruise N Groove!).

Last year, KC/Harry W. Casey, who was co-starring with Village People at a "Special Needs" fundraiser in Maryland, was singing a catchy chorus that was rolling around in his head. There was no doubt that it would sound great with the group's well-known macho male vocals. KC said, "If you like it, I'll write it for you." In April 2013, while performing in Florida, the group took a side trip to Miami to record the song.

To date, Village People have sold over 100 million CDs, earned a Star on the Hollywood Walk of Fame, and play approximately 50-60 concerts worldwide annually. The critics still rave about their concerts as "a great party"!

Also, beginning this September, the group announces a cast change, adding Broadway heart-throb from Alabama Jim Newman to the group as the Cowboy. Jim is quoted as saying, "This opportunity could not have come at a better time in my life! I am thrilled to be a part of history in the making."

The group still boasts mostly original and long-time members. Felipe Rose, Alexander Briley and David Hodo began in 1977 when the group was created.

Ray Simpson joined the group as lead singer/Cop in 1979 in time to co-star in their movie "Can't Stop the Music". Eric Anzalone has been with the group for 17 years replacing original Biker Glenn Hughes who passed away from lung cancer. Jeff Olson, who had the longest run as the group's Cowboy (since 1980) has recently given up his boots and spurs.See More