MOVIE SPOTLIGHT - "THE JERSEY DEVIL" TO BE RELEASED OCTOBER 27th 2015 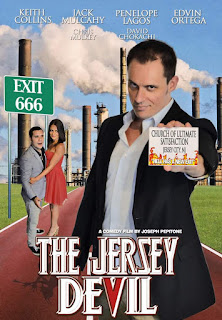 The Devil is coming!!! Word on the street is that the new Pepitone brothers comedy The Jersey Devil has inked a deal and will be landing on screens and in your living room October 2015. This film was brilliantly compounded and the acting is superb. A must see for all comedy fans. The Jersey Devil has  our stamp of approval. Groundbreaking, original and moving, unlike anything you've seen before. Don't pass up on this one!

THE JERSEY DEVIL TO BE RELEASED WORLDWIDE OCTOBER 27TH 2015!
Award-winning comedy film "The Jersey Devil" is aiming to give the comedy genre one "HELL" of a ride!

Straight from the CHURCH OF ULTIMATE SATISFACTION, "The Jersey Devil" is set to make its mark in the comedy world with Shami Media Group, Inc., a distribution, marketing, and media leader in worldwide film distribution, recently acquired the film and has set a official worldwide release date of Tuesday, October 27th 2015.

Sham Media Group is led by film veteran Bob Shami. With over 15 years of film distribution, their movies are currently found in retailers such as, F.Y.E., Best Buy, Tower, Barnes & Noble, Amazon, Sears, Kmart, MVD, Walmart, Target, Frys, Baker & Taylor, Red Box, iTunes and Netflix. They will now be adding "The Jersey Devil" to their catalog of outstanding films.

"The Jersey Devil" was the recipient of three awards at the 2014 Downbeach Film Festival Atlantic City Cinefest including Best Comedy Feature. The world premiere was held at the historic Loews Landmark Theater in Jersey City, NJ which attracted a crowd of over seven hundred people including celebrities, press and politicians.

“We are really happy to be part of The Shami family,” said Writer/Director Joseph Pepitone. “They have the ability to get The Jersey Devil out to the largest possible audience. I’m excited for the public to see this film.”