WGN AMERICA PARTNERS WITH THE BLACKHOUSE FOUNDATION DURING THE 2016 SUNDANCE FILM FESTIVAL, IN CELEBRATION OF "UNDERGROUND" 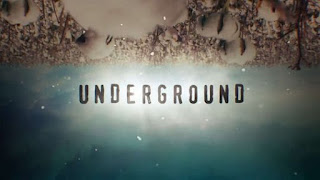 
WGN America announced today a first-time collaboration with The Blackhouse Foundation, an Institute Associate of the Sundance Film Festival, to present “The Making of WGN America’s ‘Underground,’” on Saturday, January 23 at 7:00 p.m. in Park City, Utah.  Scheduled to take place at Blackhouse’s Sundance headquarters located at the Buona Vita Restaurant, 804 Main Street, Park City, the exclusive “clips and conversation” panel event will feature “Underground” executive producer John Legend, along with the cast and creative team from the hotly anticipated escape thriller set to premiere Wednesday, March 9 (10:00 p.m. ET/PT) on WGN America.  Following the panel, WGN America and John Legend will host an “Underground” party, featuring the series’ stars and producers, at David Beavis Gallery, 314 Main St., Park City.
An exploration of a pulse-pounding journey about the revolutionaries of the Underground Railroad, the series' cast and creators will delve into the inspiration and strategy behind the development and production of the cable network's latest original.  Featured on “The Making of WGN America’s Underground” panel are: executive producer John Legend, creators and executive producers Misha Green and Joe Pokaski, executive producers Akiva Goldsman, Tory Tunnell and Mike Jackson and executive producer and director of the first four episodes, Anthony Hemingway.  Joining the executive producers are stars Jurnee Smollett-Bell (“True Blood,” “Friday Night Lights”), Aldis Hodge (“Straight Outta Compton”), Jessica de Gouw (“Arrow,” “Dracula”), and Alano Miller (“Jane The Virgin”), with Blackhouse Foundation chairman Brickson Diamond serving as moderator.
"Independent spirit is at the heart of both 'Underground' and the Sundance Film Festival, and we are thrilled to be partnering with Blackhouse to bring the dynamic world of ‘Underground’ and the artists who created it together with the festival community which supports provocative, authentic voices," said Matt Cherniss, President and General Manager, WGN America and Tribune Studios.
"WGN America's ‘Underground’ is the perfect realization of the dream of Blackhouse - expanding distribution platforms to create opportunities for a new generation of storytellers to reflect our histories and lives in ways the entertainment industry didn't even think was possible,” said Diamond.
“Underground” follows a group of courageous men and women who use their ingenuity, power and perseverance to attempt the greatest escape in history and break free, despite the dire consequences that awaited them on the other side.  The story follows a courageous blacksmith Noah (Aldis Hodge) who covertly organizes a small group of his fellow slaves and pieces together a daring plan of escape across hundreds of miles to freedom.  The odds of success are razor-thin for those who make it off the plantation, while the risks, dangers and obstacles multiply each step of the way.
“Underground” is created by Misha Green ("Sons Of Anarchy," "Heroes") and Joe Pokaski (“Daredevil,” "Heroes,") who executive produce alongside Academy Award-winner Akiva Goldsman ("A Beautiful Mind," "I Am Legend") of Weed Road Pictures; and Joby Harold ("King Arthur," "Edge of Tomorrow") and Tory Tunnell ("King Arthur," "Holy Rollers") of Safehouse Pictures.  Visionary artist and producer John Legend, an Academy Award, Golden Globe® and multi-Grammy Award winner, and his Get Lifted partners Mike Jacksonand Ty Stiklorius executive produce.  Additionally, Get Lifted oversees all elements of the show’s music.  Anthony Hemingway (“The Wire,” “Treme”) directs and serves as executive producer for the first four episodes.

About WGN America and Tribune Studios
WGN America, the flagship entertainment network of Tribune Media Company is nationally distributed in 73 million homes via cable, satellite and telco, with high-quality entertainment programming including the breakout hit series “Salem," Emmy-Award-winning drama “Manhattan," and upcoming scripted dramas “Outsiders” and “Underground.”  The network also brings its audience a strong slate of popular first-run syndicated series and blockbuster movies. Through Tribune Studios, the creative development arm of Tribune Media, original content is produced for WGN America and Tribune local stations nationwide.  Follow the network on Twitter @wgnamerica.  For additional information, please visit www.wgnamerica.com
Follow:
Facebook https://www.facebook.com/UndergroundWGN
Twitter https://twitter.com/undergroundwgn
About The Blackhouse Foundation
Since its inception The Blackhouse® Foundation has worked to expand opportunities for Black filmmakers by providing a physical gathering venue for their constituents at the world’s most prominent film festivals, encouraging their inclusion of black filmmakers with films selected by the festival and creating a nucleus for continuing support, community, education and knowledge.
Posted by DAILY FILM FORUM at 12:30 AM