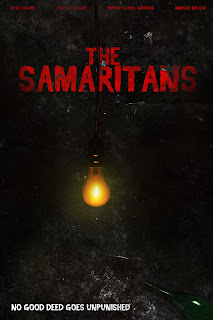 The official trailer for the new award winning thriller film, “The Samaritans” is officially released.

The trailer reveals the harrowing world of The Samaritans. A group of four co-workers are summoned to collaborate on what may be their final project as they struggle to reconcile their past decisions with their present confines.

We have billed this as one of the most scariest movies of the decade and we stand true to our word. This film is the most shocking, revealing, clever pieces of cinema we have seen in a long time. A film that will leave it's mark, The Samaritans fully delivers with unbearable fear and unforgetable fright. The cast of this gem is impeccable really selling the scare factor, while on screen they are all just down right creepy in their own way. Hoping for a release date soon, do not miss out on any chances to view this film when possible you'll never forget it!!

The official trailer can be found on YouTube at,
https://youtu.be/ki6wMYIP46o

“The Samaritans” tells the story of Four co-workers who get together to finish a project at their manager’s home. They haven’t actually met face to face and they discover they have more in common than the new App they are perfecting. As they piece together their histories, they realize that each of them has a deadly secret that could reveal a way out or seal their fates. Their pasts have provoked a vengeful force to show them the errors in their ways. The home they have been summoned to becomes their court and their prison. Can they prove that history doesn’t repeat itself? Can they redeem themselves before time runs out? Will they figure out their fateful bond before revenge has its way with them?