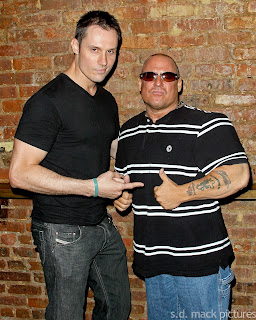 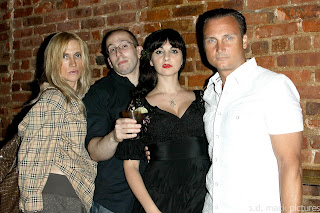 
Saturday night was a mob scene at new hip New York City hotspot Foundation for the official cast party of the upcoming thriller “Pshycho-Path” patrons looked on with awe as the cast mingled and posed for pictures throughout the night. The film directed, written & produced by award winning filmmaker Geraldine Winters (Cownstrophobia & Non Compos Mentis) and stars Jason Prager of CW’s Beauty and the Geek, new rising star Keith Collins, Ashley Brooke & Bobby Max. Others in attendance at the event were the man with the biggest arms Gregg Valentino (from TLC’s Man who’s arms Exploded), Actress Theresa Galeani, Billy Garcia from (Survivor). Saturday nights event was one not to be missed as they all partied on till the wee hours in the am and many enjoyed foundations raised stripper pole which had ladies arguing to get a twirl on. “Psycho-Path” will be out this winter for more information on new lounge foundation log onto, www.FoundationNYC.com
(Photo Credit- Steve Mack S.D. MACK PICTURES)