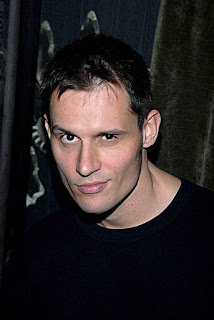 Actor Keith Collins has played many roles before but none like the one he has recently signed on to film. Currently on movie set in Newark, NJ and filming this summer’s new upcoming Horror/thriller feature film “Psycho-Path” We caught up with Collins who has been on the creepy set that revolves around a huge asylum transformed into what one would say an extremely chilling atmosphere just being there behind the scenes was giving us the chills at this rickety type area that was transformed into a Hollywood film set. With lots of spectators and film crews running around surrounded by big lights and many film cameras Collins was in wardrobe and getting ready to jump into his character as Professor Brett Wallace the skeptic out to debunk the supernatural/paranormal & was able to talk with us for a moment Eagerly waiting to find out more about “psycho-path” and what better way than being there right in the middle of the action. Pleased to say we were able to find out so much more about this new bone-chilling film. A paranormal investigator, two college professors, along with two students go to a remote building on the grounds of an abandoned mental asylum to investigate the disappearance of two of their colleagues. While there, they discover that inhuman experiments were carried out on the patients by an evil doctor who removed brain parts that rendered the subjects into little more than primitive monsters on a quest for "food." “Psycho-path” will be out winter of 2010. Produced by DGW Films psycho-path was written by award winning writer Geraldine Winters. The talented cast stars Keith Collins as (Brett Wallace), reality star Jason Prager of the CW’s (beauty and the Geek as Dr Raimee), Bobby Max as (Jake), Ashley Brooke as Kate & Lauren Riley as (Nurse Gretchen). “Psycho-Path” is directed by Geraldine Winters. We look forward to seeing “Psycho-Path” this winter. Sounds like one movie creep show not to be missed!!
(Photo Credit Derek Storm - Retna)
Posted by DAILY FILM FORUM at 10:46 PM