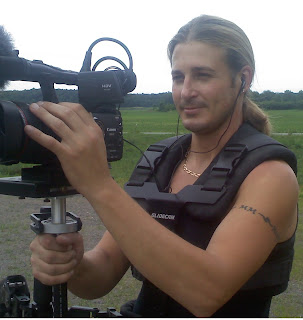 Filmmaker Nicholas Boise Currently on movie set in Rochester, New York and filming this winters new upcoming thriller/Mystery feature film “Morgan Family Picnic” Taking some time to sit with us and letting us snap a quick picture while being mobbed by onlookers. We caught up with Boise who has been on the spooky set that revolves around a camp ground transformed into what one would say an extremely chilling atmosphere just being there behind the scenes was making our minds wander with anticipation at this old abandoned and gloomy area that has been molded into a Hollywood film set. With lots of spectators and film crews running around surrounded by many lights and cameras, Boise was able to talk with us for a moment as we were eagerly waiting to find out more about “Morgan Family Picnic” and what better way than being there right in the middle of the all action. Pleased to say we were able to find out so much more about this new Suspenseful film. A newly mutated flu virus threatens to wipe humans of the face of the earth. Four hours after contact the infected humans will display extreme flu like symptoms. By the eighth hour the infected has a 108 degree fever which destroys most brain function. Twelve hours after contact their temperature stabilizes at 104 and an overwhelming desire for raw meat consumes them. Young girls seem to have less effect to the virus and in some cases can still speak. These special girls form human flesh eating clans. Within days the newly born virus has spread out control. Can the humans find a way to remain alive? Or maybe one girl will unite all of the infected into an immense clan that will conquer all. “Morgan Family Picnic” will be out early winter of 2011. Produced by Boise & MM Mayhem Films the compact cast stars Theresa Galeani, Keith Collins, Madelaine Kemp, & Austin Handfield with special appearances by many others “Morgan Family Picnic” is directed & written by Nicholas Boise. We look forward to seeing “Morgan Family Picnic” this winter. Sounds like one movie thrill ride not to be missed!!
Posted by DAILY FILM FORUM at 7:50 PM