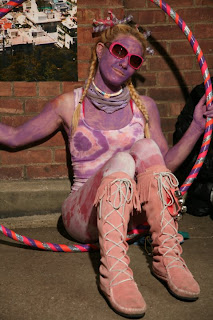 Actress Theresa Galeani Gets Colorful
For the past year Theresa Galeani has been painting herself purple to join the cast of the weekly cable tv show “The Colors Project” as the character Violet. “The Colors Project” weekly tv show portrays a portal of Aliens broadcasting live from the planet Prudenia. They idealize the earth experience to help humans evolve rather then destroy themselves and the Earth. The collective was created by Jonathan Kowalski aka Blue, at an art space in Atlanta, GA in 1999 and expanded into a troop performing regularly outside in Times Square. In 2006 “The Colors Project” broadcasted live for the first time at MNN studios in Midtown Manhattan and has since made a home at the cable access network.
With the overwhelming popularity of the TV show, now Galeani’s character is coming to life on the big screen. Currently on movie set (located in Central park New York City) and filming this summers new upcoming hit feature film “VIOLET” We caught up with Galeani who was in her makeup chair getting her purple paint applied for the scenes of the day. Eagerly waiting to find out more about “Violet” – the movie. And what better way than being there right in the middle of the action. Pleased to say we were able to find out so much more about this new adventurous film.
Violet is an alien that hails from the planet Prudenia and has come to Earth to learn from the humans that inhabit the strange and wonderful planet. Over the course of one day she meets other alien ambassadors who assist her in her studies and protect her from the harsh realities that exist on this planet. New York City becomes a playground for the colorful aliens where they meet the characters that make the city so great, joining with them to sing, dance, and hula hoop to happiness. “Violet” will be out winter of 2010 a film based on the characters created by the collective will be an action packed musical extravaganza. Produced by Stoffa Productions “Violet” was written by award winning writer Kirsten Stoffa and stars Theresa Galeani & Jonathan Kowalski along with the talented cast of Jonathan Drury, Kirsten Stoffa, Eric Dahl, Gregory Bostrom, Christopher X. Brodeur, Theodore Stoffa Kowalski
“Violet” is directed by Kirsten Stoffa, Jonathan Kowalski & Jonathan Drury. We look forward to seeing “Violet” this winter. Sounds like one movie-adventure not to be missed!!
Posted by DAILY FILM FORUM at 9:08 PM