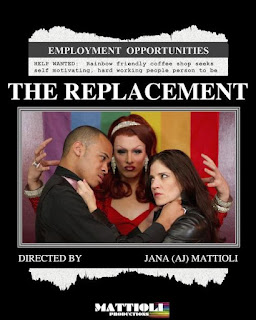 Without notice, Clara quits her position as The Cup’s Coffee Shop manager. This causes flamboyant waiter, Jamie, (award winner Keith Collins; The Meat Puppet) and the Drag Queen owner Bea Reasonable (Danny Logan as Dallas Dubois; Miss Fire Island 2011), to search for her replacement. Bea soon discovers over a series of terrible interviews that The Cup’s regulars aren’t exactly manager material. When all hope appears to be lost, Josh (Bobby Walker; Coffee and a Bite) enters the shop to apply for the position. The interview goes incredibly well, and Bea believes she’s found her replacement for Clara… but in a day where nothing has gone Bea’s way, can it really be that simple?
Within these 12 minutes you will laugh your ass off and ask for someone to rewind!!