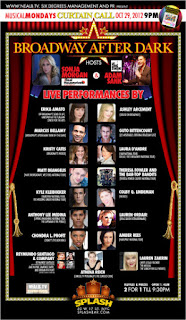 On Monday, November 5th, 2012 come celebrate Halloween a few days early with “Broadway Sings for Pride: Broadway After Dark” at the legendary Splash in New York City.  Splash amps up their usual Musical Monday’s line up to benefit Broadway Sings for Pride (www.BwayPride.org).  The night, starting at 10:30pm, will consist of killer musical performances from Broadway’s best talent, sexy burlesque numbers, fierce drag queens, raffles and much more!  Cast members from Broadway’s Wicked, Spider-Man: Turn Off The Dark, The Lion King, Hair and many more will turning up the heat!  The event is free but Broadway Sings for Pride will be accepting donations throughout the night!

Before the show gets rolling, audience members will have a chance to meet and greet the singers.  Raffle items for the night will include: tickets to Bring It On: The Musical and Forbidden Broadway; a one-on-one drag make up session with Clive Barnes Award-winner MJ Rodriguez (Angel in New Wold Stages RENT), a one hour private one-on-one personal work out training session with Matthew J. Riordan Trouble: The Musical at the New York Musical Theater Festival), and specialty Broadway items.  Broadway After Dark is being produced by Neal B of www.NealB.tv, Henry Ravelo Six Degrees Management and PR president, and Splash.

Splash is located at 50 W 17th St, (between Fifth and Sixth Aves)