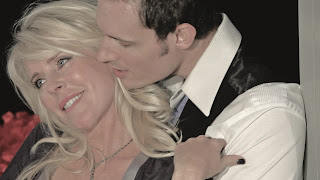 Risk-taking indie band ‘Side FX’ is releasing their first music video for the album ‘Spin Me Ever After’ during their performance on Playboy’s radio program ‘Playmates Present.’ Within 24 hours, the video went viral hitting number 8 on the most viral videos and scored a number 55 on the YouTube charts. Using a single off the album ‘Man I Used to Know,’ lead singer Kim Cameron shows off her sultry side in a big way with this release with her man outfit consisting of black lacy undergarments.

Unlike some of the other Side FX music videos, the group decided to focus solely on the song’s story, shooting it in black and white, and leaving the viewers with a cliffhanger. “This is the first of a five-part series,” Cameron explains. “Like the album, the music ‘Spin Me Ever After’ videos are meant to be watched as a series.” While the group will release the videos one at a time, they are waiting to see if there is true interest in the story before sending the next one out to the Net.

Side FX is a known for pushing the limit with their musical sounds, all of which have paid off last year with 5 charting singles, 3 of which hit within the top 40 on Mediabase and Billboard. Their newest album has received glowing 5 out of 5 star reviews by numerous music critics across the country.

The music video series is referred to as a Spinning Romance, and is largely focused on Kim Cameron and her co-actor Keith Collins. Collins has appeared in numerous film, television, commercials, and national print ads. Collins received the coveted award for best actor at the 2012 Downbeach Film Festival Atlantic City Cinefest for his work in the soon to be released film "The Meat Puppet." Collins, no stranger to the big screen has been in films along side numerous Academy & Emmy Award nominees & Winners. He has a new TV show hitting the networks titled "The Coffee Shop" and has been featured on "Sex & the City," "Guiding Light," and has had a recurring role on Fuse TV's "The F List."

While this music video is the first to be released, it is actually takes place in the middle of the Spinning Romance storyline. “I’ve always believed that songs tell a story. With this new album, the stories behind them, and using film, I can actually show people what this album is about,” explains Cameron.

The Internet version will be released on October 12th, and an extended version will be available on cable TV towards the end of the month. The film was Directed and edited by Brandon Ruckdashel (actor and cinematographer), making his directorial debut and produced by Parule –Barua from Wide-Eyed Entertainment.