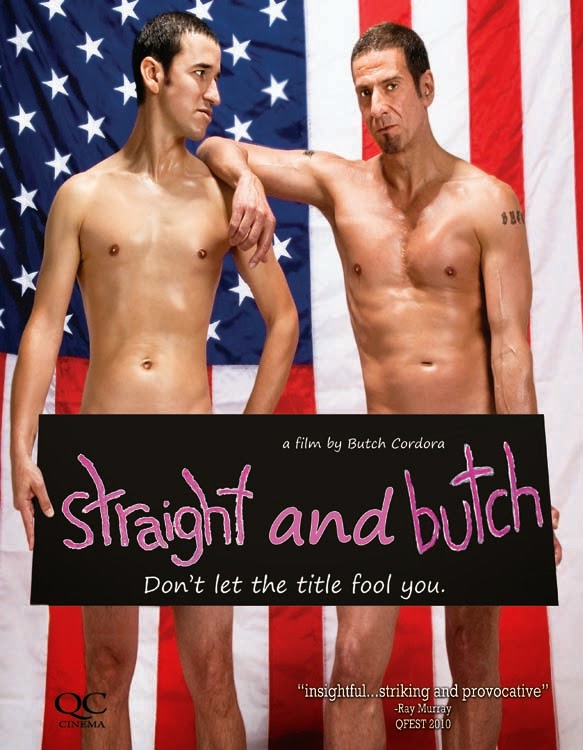 In 2007, popular gay Philadelphia TV talk show host, Butch Cordora (In Bed With Butch) had a vision: to publish a calendar that recreates iconic photos in pop culture. The catch? The photos would feature Butch, along side a cast of exclusively straight male models. The second catch? They would all be posing nude. Watch as Butch and his team of photographers, models and assistants strive to re-stage everything from Rolling Stone covers to Beatles album art, all the while confronting public indecency laws, a painstaking model search and creative conflicts - not to mention the occasional stage fright. "Straight and Butch" presents an often hilarious behind-the-scenes glimpse of the creative process as it uncovers the naked truth about how much common ground exists between men who play for different teams.

The concept behind my project "Straight and Butch" was to comb the tri-state area to ultimately find 12 beautiful, fit, heterosexual men to strip off their clothes and pose naked in front of a camera for a very provocative (some might say controversial) photo shoot in the hopes of publishing a 2009 calendar. These guys, one by one, would be posing nude with another naked man who happened to be gay. That would be me; Butch. Hence the title, "Straight and Butch". Not only would these 12 brave souls be photographed but also filmed as well, for what would become my 2010 feature length documentary of the same name.

Although on the surface one might say this is a cheesy, cheecky, eye candy, vanity project with little redeeming value, the deeper message was always to make a bold, powerful statement (a social experiment, if you will) about where we are in the world today in regards to tolerance, acceptance, sensitivity, sexuality, masculinity and the human condition; including, but not limited to objectivity. Look, but don't touch. Straight, but not narrow. These 12 very hot, sexy, gorgeous straight men, not only had the courage and conviction to step up to the plate to work with me on this amazing project, but very simply helped me realize one of my dreams.

With a background in journalism and communications, Butch Cordora became host of his own gay TV talk show called "In Bed With Butch" which aired on both Public Access and PBS channels simultaneously in the tri-state area (PA/NJ/Del) from 1999 to 2009. Restless to spread his wings in other artistic directions, he began to dabble in writing, photography and filmmaking which ultimately changed the trajectory of his career. After 3 short films, he was ready to try his hand at producing, directing and starring in his first feature film. Butchs' passion for documentary filmmaking is now leading him down a new path that he hopes will continue and grow, including his next new passion project, more feature films and a docu-series in the works.


*I started shooting the calendar (and the movie) in August, 2006 with hopes of executing a 2008 calendar.

*It was so hard finding guys, not only willing to take a nude photo, but to be filmed naked for a movie, that the calendar got pushed back to 2009.

*We filmed for 2 and a half years!

*Ironically, the very 1st model was Gervase Peterson who many people will know from the very 1st season of "Survivor", not to mention last seasons "Survivor: Blood vs. Water"

*The movie was finally finished in the spring of 2010

*Although I submitted it to approx 25 film festivals in 2010, Qfest was the only festival that accepted it

*It was nominated for "Best Feature Documentary" but lost

*In the fall of 2010, I signed a contract with "Breaking Glass Pictures" and they became my distributor for all of North America

*The movie was release on DVD in April 2011 and sales continues to do well on Amazon, VOD, Barnes and Noble.com, BestBuy.com as well as indy bookstores around the US

*On Feb 18th 2014, I received confirmation that HereTV purchased Straight and Butch through my distributor, Breaking Glass Pictures

*Friday, May 30th, 2014 Straight & Butch begins a one month run on HereTV, airing on and off for an entire year w/the option for renewal after that


Being on HereTV is such an incredible opportunity and is, without a doubt, my 1st real national platform to speak of. I sincerely hope my film does gangbusters because I would love to become a part of the HereTV family with hopes of pitching more concepts to "development". I have a lot of coals in the fire including a pretty interesting idea for a 6 to 8 part docu-series that I would love to attempt with them. I don't think HereTV has anything like that going on at the moment and although these ideas are not all worthy of a 90 min documentary, collectively, it's a fascinating project I'm dying to do w/a network. Without giving anything away, let's just say, I fancy myself as "The Gay Morgan Spurlock"!