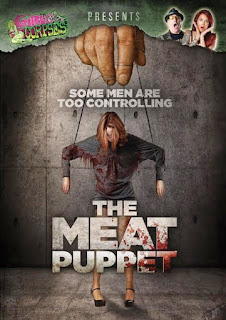 Valenti Vision Films, Silver Phoenix Entertainment in association with Keith Collins Media Inc., is thrilled to announce the award winning film "The Meat Puppet" has been picked up for worldwide distribution by TomCat Films.

We have reviewed this film a while back when it premiered in NYC. This movie deserves 4 stars. It’s brilliantly written, the acting is superb and its shot in an eerie setting that gives you chills. Collins’ performance is flawless. He takes charge as the lead role (Andrew Shelton) bringing this character to life as the fullest extent of a psycho human being trying to fit in. His performance can possibly be compared to Linda Blair in the Exorcist or Anthony Perkins in the original Psycho. One not to miss, Collins will give you nightmares for a week. Geri Reischl who plays the misfit (Aunt Claire) is nothing short of perfection she brings her horrifying character to the screen and sends chills throughout your body. Brandon Ruckdashel (Detective Dave Benash) gives a stunning performance as he plays a full on cat and mouse game with Andrew Shelton. Watching the two characters unfold on the screen gives just the right amount of banter you’d want to see. Newcomer Daniela Rivera (Terri Costas) holds her own against the veteran actors. Her performances rise at times and she is one to keep your eye on. The chemistry between her and Collins on screen is impeccable as she falls deeper into his prey. We recommend this movie as a must see once it’s released you won’t be disappointed.

"The Meat Puppet" is looking to take a bite out of its competition around the globe now that TomCat Films is onboard as their distributor. TomCat Films is primarily known for its genre and mockbuster titles (Aliens vs Avatars, Thunderstorm: The Return of Thor, Agent Beetle) and is headed by sales and distribution veteran Ted Chalmers. "The Meat Puppet" has won 5 awards so far, including: Best Horror Film, Best Actor (Keith Collins) and Best NJ Feature. The film was produced entirely in New Jersey and features some of the final footage taken at Union Beach and Jakeabobs Restaurant and Bar, which were both devastated by Hurricane Sandy.

Synopsis:
Andrew "Drew" Shelton (Collins) appears to have it all… Looks. Money. Women. But behind that charming smile lies an unimaginable evil. An abusive childhood has turned him into an impulsive, delusional sociopath who has developed an insatiable appetite for beautiful women’s flesh. As the bodies pile up and a gung-ho detective (Ruckdashel) starts stalking him, Andrew descends deeper into madness. His obsession with one woman (Rivera) may be the only chance to stop him from serving up his next victim. Or will she fall prey and become the next main course?

Posted by DAILY FILM FORUM at 2:00 AM