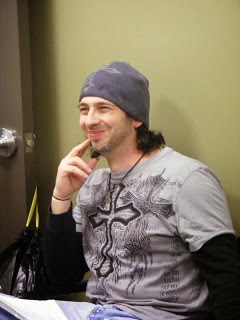 Joseph Pepitone is a two-time Emmy winning writer and also the director and co-writer of Stuck in the Middle and The Jersey Devil. Pepitone is currently working on two films, Phoenix: The Resurrection and Clean Cut.

DFF: You now have two films you co-wrote and directed under your belt. How did the second one differ from the first?

JP:  For Stuck in the Middle, had a very small crew. I am still amazed that we were able to make such a great film with the little resources we had and the little knowledge I had. Blind squirrel theory I guess. When we made The Jersey Devil, I had more experience and a lot more help. We had an incredible team and they covered all the bases and it freed me up to just worry about directing. It makes a world of difference when you have a great team doing a great job.

DFF: Stuck in the Middle is distributed and currently on Amazon. Where and when will The Jersey Devil be available?

JP: The Jersey Devil will be available everywhere in 2015. We have several distribution companies interested and we will be screening at more festivals. I’m very excited for the public to see this film.

DFF: What do you enjoy most when directing these films?

JP: The best part is being able to work with such amazing actors. Keith Collins, Penelope Lagos, Jack Mulcahy, Stephen Fontana, Evonne Walton all have been in both my films and they have been terrific. I love writing for them and I love to see how they bring those characters to life. On The Jersey Devil we added Chris Mulkey, Edvin Ortega, Rosie Gunther among others and the chemistry was electric. It is a pleasure watching these actors work. Makes my job a lot easier.

DFF: You currently in pre-production on two films. Tell us about those.

JP: Yes, it’s going to be a busy year. Phoenix: The Resurrection is a film we have been working on for a few years. This one is my brother Billy’s idea and we are really excited about it. But first, we are going to tackle the horror film, Clean Cut. This is a concept Keith Collins came up about an obsessive-compulsive, bible quoting serial killer that my brother and I wrote. We had a lot of success with this formula on Gravedigger, which is currently available everywhere. We are going to shoot Clean Cut at the end of February 2015.

DFF: You’ve written comedies, horror and action. How are you able to move back and forth between genres?

JP: We find it easier to break it up. We try not to write for the same genre twice in a row. Once we finish a comedy we like to get away from that, get a little more serious and then get back to it with some fresh ideas. It also keeps us sharp to get out of our comfort zone sometimes.

DFF: How can we keep updated on your projects and the new upcoming film Clean Cut?

DFF: Thank you and we look forward to seeing all of your projects especially "Clean Cut"

JP: Thank you for the support.
Posted by DAILY FILM FORUM at 12:30 AM