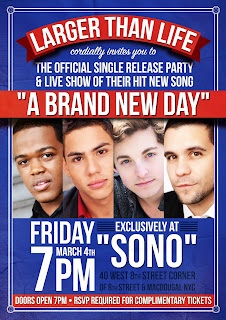 Pop entertainers, Larger Than Life will be celebrating the release of their debut single “A Brand New Day” this Friday at NYC hotspot SONO.  Larger Than Life was founded by John Wagner and actor/singer Edvin Ortega (“Orange Is The New Black”) they will be joined by the entire cast of their "Ultimate Boyband Tribute."  The band has been performing in front of large crowds with their exclusive show, which features the guys singing hits from groups like Backstreet Boys, ‘N Sync,  98 Degrees, Jackson 5, One Direction and many more.
With synchronized dance routines, smooth vocals, and guaranteed fun, join LTL on March 4that 7pm.  The band will be performing their single “A Brand New Day” live along with another original song and 90s hits from all your Boyband favorites.  Larger Than Life will also be filming the release party for a documentary they’re working on about their journey to “A Brand New Day” and beyond!
Posted by DAILY FILM FORUM at 2:42 PM