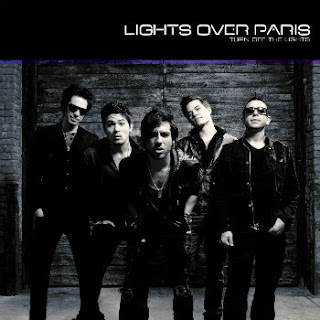 The band itself consists of Frontman Robb "TaLLLLL" University, who draws from his own experiences and imagination as he writes and performs LOP's vocal tracks. Will "W/P" Pepper rocks out on his custom Keytar providing the synth beds that make LOP rock on the dance floor. Lead guitarist Devin Bronson is the seasoned veteran of Lights Over Paris, having played for Avril Lavigne and Kelly Osbourne. Bassist Mike Torres was handpicked for his mind-blowing fretwork, which made him a star on tour with Ashley Tisdale. Keeping a tight pocket, Dave Gentry spends every day of his life kicking on the drums. Rounding out the band is the band's DJ, Shiny.

Lights Over Paris dropped their first EP, Turn Off The Lights EP on April 13, 2010 on Digital Records/Type One Records. With musical influences from AC/DC, and Lady Gaga to Blink 182 and Black Eyed Peas, Lights Over Paris is not limited to one particular genre. "I wanted to make an album where all the songs didn't sound the same" says TaLLLLL, "My influences were all over the place."

Their debut hit single, "Turn Off The Lights" is an infectious track, produced by multi-platinum producer/artist Kevin Rudolf ("Let It Rock" & "I Made It") which is already heating up the airwaves across the country at Top40 Radio. The band is now on their first tour which hits 34 major cities across the country!
“Turn Off The Lights” official video http://www.youtube.com/watch?v=QoxSURZEUE8
Posted by DAILY FILM FORUM at 5:34 AM